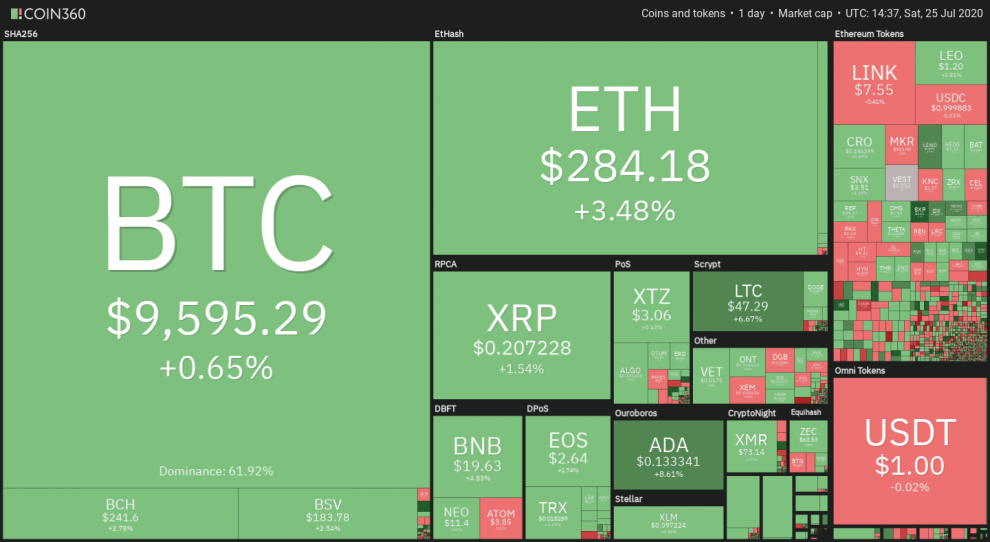 The price of Bitcoin (BTC) held the crucial support level of $9,000, after which a rally to $9,600 occurred, as anticipated in last week’s technical analysis. Nevertheless, the overall market trend for BTC price has not broken out of its range since the halving in May.

The support area is $8,800-9,000, while the resistance can be found between $10,100-10,300. The volatility and volume have been decreasing as this range has been narrowing. So when can the market see volatility and big moves again? 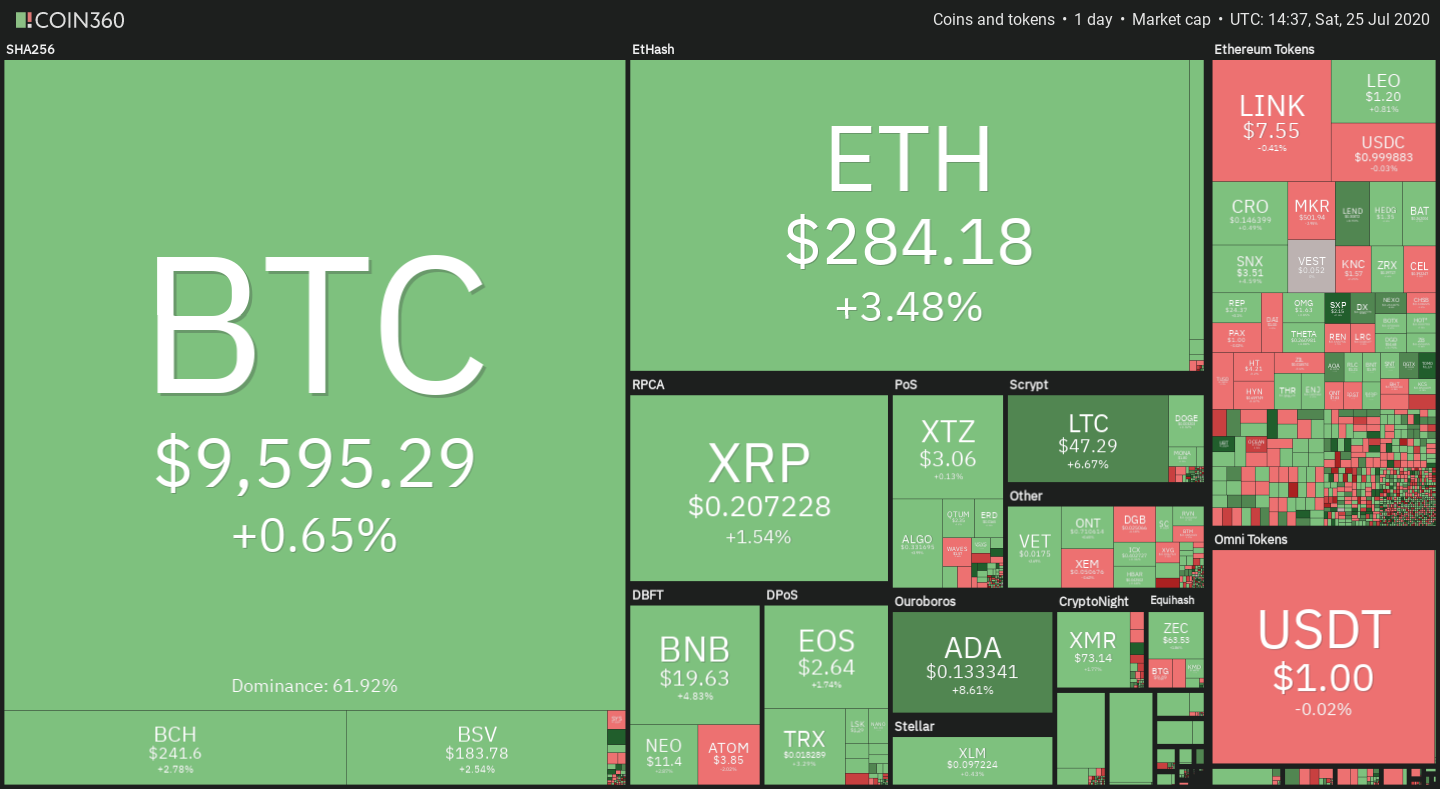 As the chart shows, the crucial support levels for Bitcoin were held this past week. The support area between $8,800-9,000 was a vital one to hold as this was the previous low.

The primary reason this was a key support level is because of the upward trend structure. As long as the price makes higher lows, the uptrend remains valid. If the price of Bitcoin loses the previous low, the price would start to accelerate downward. The likelihood of many stop/loss triggers getting hit is high, increasing the chances of a $1,000 downward candle.

However, the price of Bitcoin bounced after holding the crucial support level. Thus, the ascending triangle construction remains intact. Moreover, the 100-day and 200-day moving averages (MAs) are beneath the current price level. As long as these remain below the price, BTC is in bull territory.

Finally, as the ascending triangle construction shows, the price of Bitcoin can remain inside the range for one or two months more.

The 4-hour chart shows a clear breakout of the $9,200 resistance level, resulting in a significant upward move. BTC/USD is currently resting at the $9,650 resistance level as this level was untested during the previous downturn.

As stated previously, a major parabolic is unlikely to happen so soon, as the price has some more untested levels above, namely $9,900 and $10,100.

The most likely scenario would be a “staircase” pattern. In that regard, the price of Bitcoin rallies towards the resistance zone rejects and then successfully tests the previous resistance zone for support. Next, the price move is likely to accelerate upward once Bitcoin breaks above the high of $10,100.

The total market capitalization of crypto breaks out

The total crypto market capitalization shows a clear breakout from $270 billion. This level is comparable to the $10,100 level for Bitcoin. However, the total market cap is breaking out already, while Bitcoin is still stuck in its narrow range.

Overall, the bullish case remains for the total cryptocurrency market cap if the support level between $265-270 billion holds.

The total market capitalization is breaking out already while Bitcoin is range-bound because many altcoins have been breaking out across the board.

Recently, altcoins have been doing relatively better than Bitcoin as some are showing impressive gains. Even Ether (ETH) broke out substantially over the past week as it surged from $245 to $285.

The chart is showing a clear uptrend for the altcoin market cap, which has been making higher highs and higher lows. The previous resistance zone at $100 billion should provide strong support for the next move up toward $125 billion.

The bullish scenario can be divided into two separate parts. The first one is an immediate breakthrough of the $9,650 level, after which the next zone to be tested is $9,900.

The second one is a corrective move down toward $9,300, after which the price continues upward. In this scenario, it can be expected that a potential trap above $9,650 occurs during the weekend. Weekend times are usually full of traps in the markets, where fake-out moves are not uncommon.

The crucial support level to hold as support is preferably $9,300. However, the $9,200 area is a make-or-break level as that’s the recent low. If the current low is lost, the complete technical structure breaks and the market is ready for further downside.

Therefore, the most likely scenario would be a grind upward to the massive resistance zone around $10,000. As the trendline and the chart are showing, this upward momentum can last for several weeks or months before a substantial breakout occurs.

The bearish scenario is pretty straightforward. A rejection at retest would, therefore, cause a drop toward $9,300.

The difference between the bullish and bearish scenarios would be a further downward continuation with failed retests of support levels.

For instance, more downside becomes likely if Bitcoin’s price makes a jump towards $9,500, but instantly rejects that level and loses $9,300 immediately after. These bearish rejections are crucial to watch if the price of Bitcoin starts to correct.

Chainlink (LINK) Becomes the ‘Tesla’ of Cryptocurrency — What’s Next?
Bitcoin Price Holds Key Support and Is on the Verge of Testing $10,000
Comment