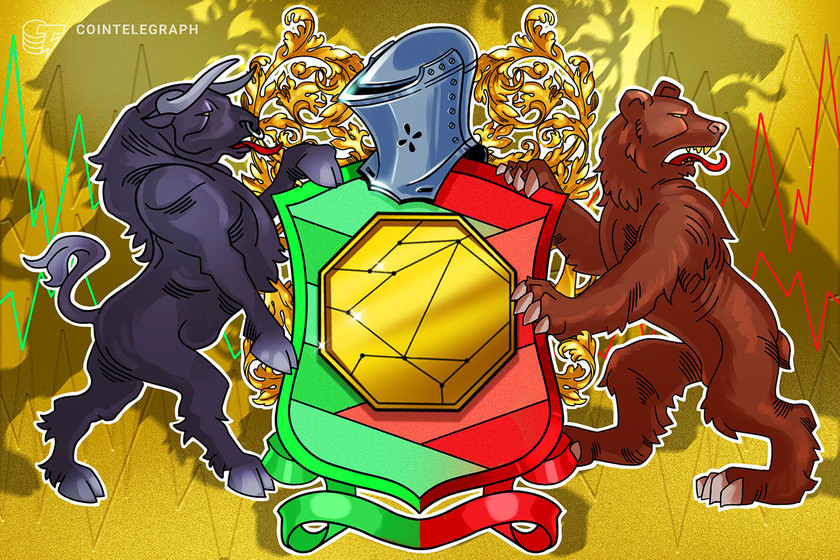 When talking about markets, both mainstream and crypto, “bullish” and “bearish” often come up in headlines and conversation, although such usage typically depends on financial knowledge and experience. What do the two terms mean?

Bullish and bearish refer to market sentiment, seen collectively or expressed by an individual. If someone is bullish, it means they expect an asset or asset class to rise in price. Conversely, bearish refers to negative price expectations. Someone holding a bullish lean is sometimes called a “bull,” or “bulls” if a group or faction of the market is bullish. Therefore, “bears” anticipate falling asset values.

Why use bulls and bears as the animals of choice for such terminology? The answer possibly lies in the way the two animals attack their prey. Bulls attack in an upward fashion, driving their horns up through their target. Bears, on the other hand, start high and attack downward with their weight and arms.

This explanation of the terminology’s roots, however, is just one possibility, according to Investopedia. “The actual origins of these expressions are unclear.” The verbiage may also stem from bearskin dealings long ago.

Oxford Learner’s Dictionary describes bullish as: “feeling confident and positive about the future,” or “causing, or connected with, an increase in the price of shares.” Bearish means: “showing or expecting a fall in the prices of shares.”

A desire for bearishness?

Bullish and bearish desires depend on a number of factors. In general, traders may care less about whether a market or asset is bullish or bearish, as long as they can trade in both directions (called going long and short). Traders often move in and out of positions more often than investors, using shorter time horizons for their plays.

Instead of wishing for bullishness over bearishness, or vice versa, traders may care more about whether they are correct in their bullish or bearish assessment, profiting on trades as long as they are accurate in determining which direction a given asset goes, depending on the trading strategies used. Some traders’ strategies, talents or tendencies may favor one market condition over the other, however.

Investors, on the other hand, generally buy into positions and hold them for longer periods of time, profiting on the price rise, so they logically might want bullish markets. An investor may take a long-term short position or sell an asset if they have a bearish view on an asset, although the most anyone can make (in pretty much every instance) is 100% profit if they short at the absolute top and ride the asset to zero. On the other hand, assets can virtually rise in price infinitely, offering possible gains of more than 100%.

Dialing into crypto specifically, why might an investor or trader wish for Bitcoin (BTC) or any given altcoin to decline in price, even if they are bullish overall on the crypto industry? One reason could be their position. If a trader is bearish on BTC — expecting upcoming falling prices — they may enter a short trade on BTC and, therefore, logically want its price to decline, as they would profit on the asset’s drop.

Traders can even be short-term bearish and long-term bullish, or vice versa. They may, for example, expect Bitcoin to retrace in price over a period of days or weeks, but ultimately rise and return to an upward, multi-month trend.

Investors or traders may also hold a bearish short-term view and bullish long-term view, wishing for lower prices in the near term to buy certain assets at relatively cheaper prices. Conversely, a market participant may have a short-term bullish view with a long-term bearish outlook. They may think prices will go up due to hype or other factors, so they may buy or go long in the short term, while ultimately expecting to sell their positions eventually because they believe the market to be a bubble or something of that nature.

It is important to note that in markets, defining short-term and long-term can be subjective.

A look at what might produce a bullish or bearish bias

Each person’s bullish or bearish view is likely based on a wide range of components, such as charts, news and general knowledge. A market participant may think Bitcoin or an altcoin is bearish for a period based on certain chart conditions or patterns.

They may also view assets bearishly on a longer-term basis after negative announcements, such as a specific government regulatory action. One might hold a bullish view for a period based on an upcoming event, such as the Chicago Mercantile Exchange’s Bitcoin futures trading launch in 2017.

People may also hold an overall bearish or bullish view on an asset as a whole. MicroStrategy CEO Michael Saylor sees Bitcoin as a new way to store value. Gold advocate Peter Schiff, on the other hand, sees Bitcoin as a bubble.

Thus, many factors play into different parts of bullishness and bearishness. Timeframes, perspectives, opinions and events can all impact a person’s outlook on an asset or asset class. Ultimately, each individual must come to their own conclusion regarding what they think.