In the previous weeks, the majority of the cryptocurrencies have seen a massive crash. Losses of 50-80% have been witnessed in the markets, particularly affecting the DeFi space.

The major losers in the previous weeks were Curve DAO Token (CRV) and SushiSwap (SUSHI). Next to that, one of the biggest decentralized exchanges UniSwap (UNI) has also seen a substantial correction. Its token UNI dropped by 57% since its recent high at $8.65.

Is the correction over for the DeFi sector, or will the crashes continue to last? Let’s take a look at the charts’ technicals.

UniSwap makes a bounce of 35% since its correction

Short-term relief is shown on the chart as UniSwap bounced with 35% in the previous days, but the trend still shows a downtrend. The first significant resistance zone is seen between $4.90-5.20, which is colored red. A further move up to $7 is on the tables if UniSwap shows strength and can break through this resistance zone.

The 2-hour chart shows a temporary trend shift. For the first time since the retracement, the price of UniSwap made a new higher high, as the previous high of $4.50 was broken.

In that perspective, the green zone between $4-4.25 should warrant support for a higher low. If that area sustains support, I’d be looking at a potential rally towards $6.

It’s not surprising for other DeFi coins to follow suit as UniSwap is the leader in the DeFi space.

The chart of SushiSwap is less bullish than UniSwap but shows a few signals of a potential trend reversal.

If the $1.30-1.325 area flips for support, a significant support area can be flipped again, which warrants a potential continuation upwards. This upwards run could continue toward the $1.65-1.70 area, as that’s the first significant resistance area.

Of course, if the price of SushiSwap loses $1.30, a further downward drop becomes likely, in which Fibonacci extension has to be used for negative price discovery.

Curve DAO Token is showing an even worse chart than SushiSwap, and any bullish arguments are hard to find here.

The target zone around the 1.618 Fib was hit, but the overall chart still looks overly bearish. In that case, the crucial breaker for Curve would be a breakout above $1.20. If that area breaks as resistance and becomes support, continuation toward $1.65-1.85 is likely.

If that flip of $1.20 occurs, a potential relief rally on the market will likely occur. Overall, the sentiment is close to depression, another argument for a reversal to happen soon. 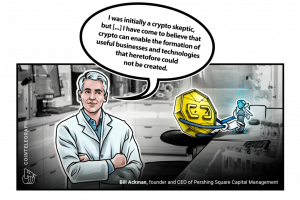