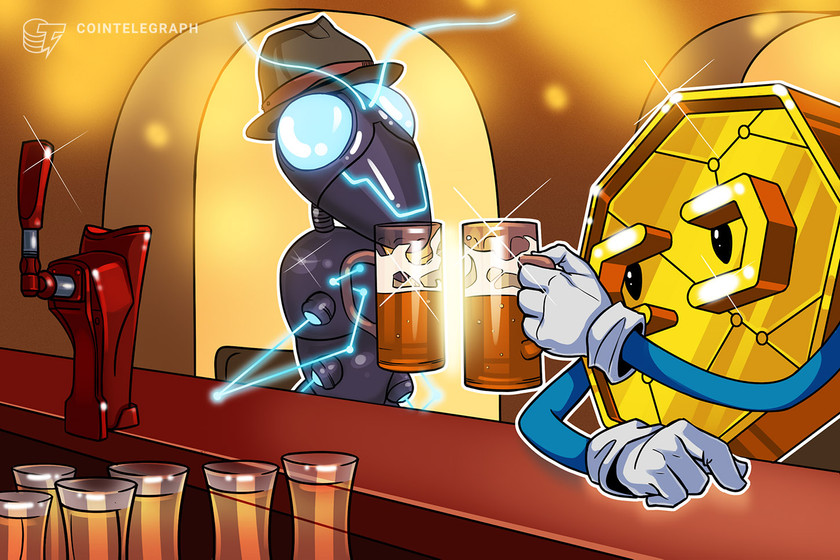 The COVID-19 pandemic dominated the news in 2020, affecting myriad sectors — health, economics, social justice, politics and trade, as well as the cryptocurrency and blockchain industry. As country after country locked down to halt the virus’s spread, governments seized upon stimulus payments to preserve economic life.

While necessary, these measures raised the specter of global inflation. This, in turn, pushed many traditional investors and institutions to take a new look at cryptocurrencies as an alternate store of value, especially Bitcoin (BTC), the top crypto. Following a March 11 dip, BTC went on a tear, reaching record levels by year end. With that as a backdrop, here are 2020’s top 10 stories of the crypto and blockchain world.

The world’s oldest and most widely held cryptocurrency shattered price records and then some in 2020. Now, at the end of the year, Bitcoin’s market cap is standing at about $500 billion — surpassing Visa and Berkshire Hathaway — and its price on spot markets continues to inch toward $30,000.

The pre-rally record high of $19,850 was set in December 2017 by retail traders in Asia (many of which just discovering cryptocurrencies) driving the price, but this year, it was by mature investors continuously purchasing increments of Bitcoin and often holding it off-chain as a long-term investment, as the New York Times noted.

“We’re seeing fresh stories about institutional crypto adoption on almost a daily basis at this point,” Bitcoin Depot CEO Brandon Mintz told Cointelegraph in mid-December. MicroStrategy, Square, Paul Tudor Jones, Guggenheim Investors and even venerable insurance company MassMutual were among those purchasing BTC in 2020. “We are being driven by corporations and billionaires now, not just retailers,” said Minerd.

“2020 was unequivocally the year of decentralized finance,” declared Da Hongfe, the co-founder of the Smart Economy network, in a Cointelegraph op-ed. True to that, the amount locked in DeFi had soared to almost $15 billion on Dec. 30, compared with only $658 million at the beginning of the year, according to DeFi Pulse.

Indeed, a new term, “yield farming,” entered the crypto lexicon. In return for staking one’s BTC or Ether (ETH) as collateral with a DeFi firm, a user might receive a governance token enabling the holder to “debate, propose, and vote on all changes to the [platform’s] protocol.”

Ownership of these governance tokens became quite lucrative in 2020. First issued in June, Compound’s COMP rose in value from $61 on June 18 to $382 on June 21 following its launch on United States exchange Coinbase Pro. It is closing the year at $148 on Dec. 31, 2020.

DeFi is a “game changer,” Giuseppe Ateniese, a professor at the Stevens Institute of Technology, previously told Cointelegraph. “With decentralized finance, there’s no human in the loop, no server, no organization. There’s no bias.” It isn’t like a traditional car loan, where if the borrower defaults, the bank goes after the car seeking repossession, he explained. “With DeFi, assets are digital and locked/committed through smart contracts. If I don’t pay the loan back, the digital asset that I used as collateral is taken, and there is nothing I can do about it.”

Bitcoin halvings, designed to limit BTC’s issuance rate — which is capped at 21 million units — occur roughly every four years, and they are typically marked by some anxiousness. They are analogous to a company telling its workers to expect a 50% pay cut. Here, it is the block reward for the Bitcoin network’s validators, known as miners, that is sliced in half.

The May 2020 halving reduced miners’ block reward from 12.5 BTC to 6.25 BTC, and it came and went without calamity — no exodus of miners or collapse in the network’s computing power (hash rate), as some had feared. Seven months later, Bitcoin is selling at roughly three times its pre-halving level ($8,566 on May 11).

The race to issue the first central bank digital currency, or CBDC, at scale moved closer to resolution in 2020, with China’s August announcement of a trial run of its digital yuan in four city hubs — Shanghai, Beijing, Guangzhou and Hong Kong — a test area with 400 million people, or about 29% of the country’s population.

Many anticipated China’s digital currency electronic payment (DCEP) project would soon achieve full rollout, but disagreements arose as to its significance. Would a digital yuan challenge the U.S. dollar as the world’s reserve currency, as the Financial Times feared? The publication wrote in August: “China’s rapid development of a central bank digital currency has the potential to upset the global monetary order.”

Or are CBDCs still so riddled with unsolved problems, such as fraud prevention and cyber attacks, that launching one now at scale would be irresponsible, as United States Federal Reserve chief Jerome Powell implied in October?

In any case, China will not have the world’s first CBDC. That distinction belongs to The Bahamas, an island nation in the West Indies that made history on Oct. 20 with the official launch of its central bank digital currency, the so-called Sand Dollar, built on a blockchain platform.

MicroStrategy goes all in on BTC

2020 was the year publicly owned corporations and institutional investors started to move the crypto needle, and no listed company embraced crypto with quite the fervor as MicroStrategy, a Nasdaq-listed business intelligence firm. Not only had it accumulated $250 million in Bitcoin by August, but it made BTC its primary corporate reserve treasury.

As CEO Michael Saylor explained, unprecedented government stimulus measures undertaken to combat the COVID-19 crisis were expected to have a “significant depreciating effect on the long-term real value of fiat currencies and many other conventional asset types, including those traditionally held as part of corporate treasury operations.” In this new world, Bitcoin is a dependable store of value “with more long-term appreciation potential than holding cash.”

MicroStrategy continued to purchase BTC through the year, and in late 2020, it raised $650 million through the sale of convertible notes to buy even more Bitcoin. As of Dec. 21, the company held a total of 70,470 BTC, purchased at an average price of $15,964 per Bitcoin. The Wall Street Journal marvelled at the firm’s transformation, asking: “Is this a publicly traded company or is it a hedge fund?”

In December, exchange Coinbase announced a bid to become the first crypto-native corporation to be listed on a major U.S. stock exchange. The 35-million-customer company could be valued at $28 billion, according to research firm Messari, if its initial public offering comes to fruition.

“It is a massive event,” Vladimir Vishnevskiy, director and co-founder of Swiss wealth management firm St. Gotthard Fund Management AG, told Cointelegraph, and not only in the U.S. but in Europe too, because “the IPO will provide a marker in terms of how markets are ready to value such companies.”

The IPO is a “milestone for the crypto industry,” noted Fortune magazine. “It’s far from clear, however, whether the United States Securities and Exchange Commission would sign off on such an arrangement.” Coinbase stirred some controversy in 2020 for discouraging employees from political activism in the workplace, and in November, the New York Times reported that some of Coinbase’s black employees had voiced concerns of discriminatory treatment. Others noted the exchange was still plagued by untimely service outages during times of high price volatility.

Even so, the IPO announcement is a major event, said University of Texas finance professor John Griffin, “showing that the path of Coinbase to work within the regulatory process is an economically profitable one.”

Telegram Group Inc. had sought to build a decentralized blockchain platform along the lines of Bitcoin and Ethereum — only better, that is, “vastly superior to them in speed and scalability,” according to Pavel Durov, founder and CEO of the open-source encrypted messenger service firm, with some 300 million users globally. But Telegram failed to overcome resistance from the SEC and pulled the plug on its TON (Telegram Open Network) project in May.

The Dubai-based firm had already raised $1.7 billion to launch the project’s “Grams” token, but the SEC deemed the coins to be unregistered securities and moved to halt their distribution — not just in the U.S. but anywhere in the world. A federal court gave the agency preliminary support.

“We are still dependent on the United States when it comes to finance and technology,” wrote Durov in a blog, adding: “This may change in the future. But today, we are in a vicious circle: you can’t bring more balance to an overly centralized world exactly because it’s so centralized.” Telegram had the participation of a number of prominent investors, including blue-chip venture capital firms Kleiner Perkins and Sequoia Capital.

COVID-related government stimulus efforts had many investors worried about inflation in 2020, and some were willing to give cryptocurrencies a fresh view as an alternate store of value. Prominent among them was Paul Tudor Jones, a hedge fund investor who reported in May that a portion of his assets was now invested in Bitcoin.

The endorsement of a celebrated investor like Jones — who predicted the 1987 stock market crash — paved the way for mainstream investors and others to become involved in crypto. “Making the case for Bitcoin as his preferred hedge against what he [Jones] calls ‘the great monetary inflation’ has significantly reduced ‘career risk’ for many of his peers considering an allocation to Bitcoin,” Bitwise Asset Management’s David Lawant previously told Cointelegraph. The Wall Street Journal also commented:

“The [Bitcoin] rally has attracted a wide cast of characters, from the Wall Street billionaires Paul Tudor Jones and Stanley Druckenmiller to momentum investors who aim to ride winning assets higher and losing markets lower. Their participation, in turn, has fueled more buying.”

The XRP token was the third-largest cryptocurrency by market value — trailing only Bitcoin and Ether — when in late December the San Francisco-based firm ran into a buzzsaw in the form of the SEC.

Led by outgoing chairman Jay Clayton, the commission filed legal action against Ripple and its top-two executives, alleging that the XRP coin created by Ripple was in fact a security, and that the firm had raised over $1.3 billion through an unregistered, ongoing digital asset securities offering. In the three days following the announcement, XRP’s price plummeted 41%, and it became unclear whether the firm would survive in its present form.

On Dec. 27, Coinbase, the largest U.S. exchange, announced that it would suspend XRP trading, and with others delisting the token, the climate around the coin has become increasingly unstable. On Dec. 29, Grayscale Investments, the world’s largest digital asset manager, reportedly liquidated more than 9.18 million in XRP.

Ripple denounced the SEC’s action as “an attack on the entire crypto industry here in the United States” as the company’s CEO Brad Garlinghouse stated that he would continue to support its customers in the U.S. and globally.

All in all, corporations and institutional investors seeking an alternate store of value amid the ongoing COVID-19 crisis propelled crypto to record levels in 2020. Elsewhere, blockchain innovation continued on several fronts, including decentralized finance and CBDC development.

In the U.S., a wary SEC stymied digital token expansion, launching lawsuits against XRP and Telegram’s TON. A change of administration in Washington, including new SEC leadership, however, could bring more regulatory clarity in 2021.