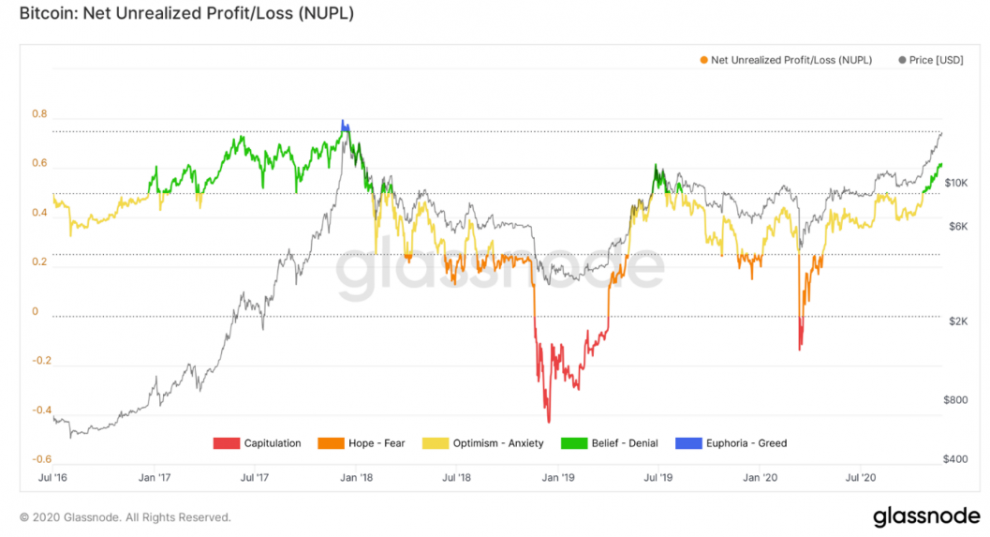 Crypto index fund provider Stack Funds has labeled yesterday’s pullback as a “healthy correction” that was needed before Bitcoin continues its upward trajectory.

Bitcoin broke through $19,000 earlier this week after posting seven weeks of consecutive gains. According to the firm, the crypto has been at overbought levels since October, further supporting the need for a correction.

The firm examined metrics around market psychology, and says market participants are currently in the ‘belief’ stage of the cycle which will eventually to flow into a ‘euphoria’ stage.

To support their claims, the fund cites Glassnode’s data on Bitcoin’s net unrealized profit/loss, often referred to as NUPL — which compares BTC’s current price with when each coin last moved on-chain.

Extrapolating the 2017 bull market pattern to BTC’s current state, the fund suggested that even a quarter of this price increase would see Bitcoin hitting more than $86,000 next year, by the time we enter the ‘Euphoria’ stage of the cycle.

Other analysts also believe this is nothing more than a blip on the road, with Quantum Economics founder Mati Greenspan speculating that the correction may have already bottomed out, adding:

“A 17% pullback is rather tame for this stage of the cycle.”

Crypto personality Lark Davis pointed out this morning that it didn’t take long for support levels to stop the correction at $16,500, asking “Was this the dip? Or are we going lower?”

Crypto trader “Mayne of Tether” told his more than 70,000 Twitter followers the pullback is going to create some excellent buy-in opportunities for altcoins. Another trader account called “teklordz tweeted that the retracement is essential:

#bitcoin
35 day pump. Now cooling off. This pullback is greatly needed. Daily RSI receding to mid level territory.
I have a feeling the the next pump will be even stronger.

Data from analytics platform Santiment indicated that profit-taking among Bitcoin holders could become rampant, with both short-term and long-term Bitcoin holders in profit of 15% and 63% respectively.

What happens to your Bitcoin when you die?
Bitcoin’s price correction may not be over, on-chain data analysts warn
Comment