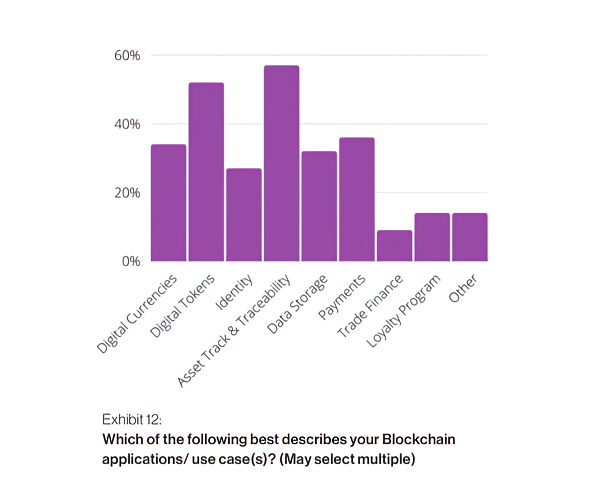 Singapore’s burgeoning blockchain industry has identified asset tracking and traceability as the top use case for distributed ledger technology, underscoring the need for better supply chain management in a post-pandemic world.

The findings were presented Monday in the “2020 Singapore Blockchain Ecosystem Report” by PwC in collaboration with OpenNodes, IBM, Ernst & Young and others.

The report, which is based on a July survey of industry players, “gives a qualitative overview of the key developments and trends in Singapore’s blockchain ecosystem.”

When asked about the various applications of blockchain technology, 52% of respondents identified asset tracking and traceability — more than any other use case. Among those who made this selection, 52% also identified trade finance as a major use case. Thirty percent of respondents selected four or more applications, an indication that blockchain use cases are interrelated.

The survey results indicate that blockchain technology’s “potential lies in how it can transform traditional workflows across different industries and organisational functions.”

Supply chain tracking is routinely cited as one of the major use cases of blockchain technology in an age of highly complex and fragmented logistics networks. That’s because supply chains are “no longer al linear and sequential chain from raw material to final product” but a “multi-tiered ecosystem of suppliers, partners and customers,” according to OpenText.

“A simple shipment of refrigerated goods from East Africa to Europe can go through nearly 30 people and organizations, with more than 200 different interactions and communications among these parties.”

Nearly half of PwC survey respondents believe blockchain adoption will grow over the next three to five years. Interestingly, companies that are headquartered in Singapore are more likely to be optimistic about the industry’s prospects over that period.

Singapore’s embrace of blockchain mirrors its positive attitude toward emerging technologies and its long-standing commitment to innovation. As Cointelegraph previously reported, Singapore’s government has sought to bring regulatory clarity to the blockchain and cryptocurrency industries — a move that could attract more companies to the island city-state.

The developers of the Singapore Ecosystem Report did not immediately respond to a request for comment.