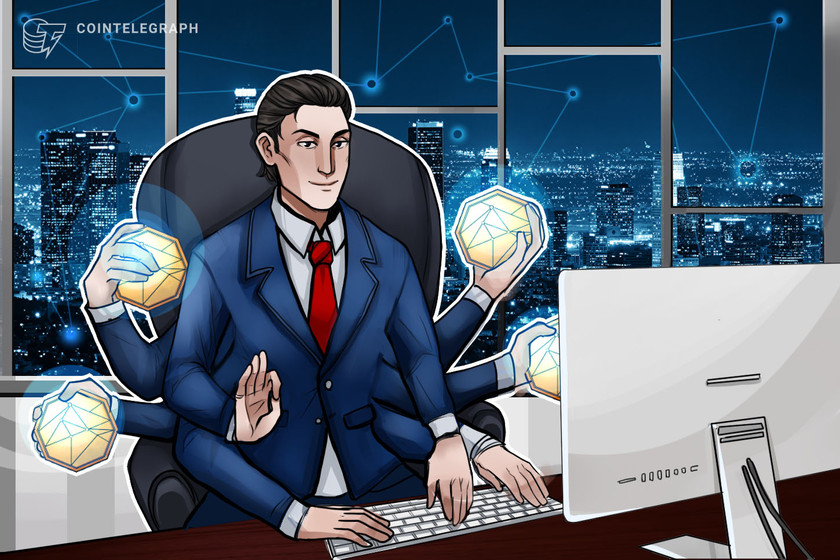 Cryptocurrency adoption has been penetrating the mainstream at an exponential rate. While most investors are going straight into buying the likes of Bitcoin (BTC) and Ether (ETH), a few skeptical investors want to invest in the cryptocurrency economy without exposure to tokens’ volatility directly.

This volatility is evident in the recent all-time high Bitcoin of around $61,700 reached on March 14, before dropping to trading in the $56,000 range and then rising to around $59,000 at the time of publication. Bitcoin’s market capitalization has now surpassed that of Visa and Mastercard combined.

For the overly cautious investors, JP Morgan recently announced its Cryptocurrency Exposure Basket, or CEB, a debt instrument portfolio consisting of 11 stocks. These stocks are either companies that hold Bitcoin as a treasury asset or companies in industries complementary to the cryptocurrency industry.

However, the efficiency of such a basket of stocks when compared to Bitcoin remains to be seen. Ben Weiss, president and chief operating officer of CoinFlip — a company running Bitcoin ATMs — told Cointelegraph that this “strategy is viable,” adding: “JP Morgan’s cryptocurrency exposure makes sense for people who want to invest in blockchain and cryptocurrencies traditionally without the volatility of cryptocurrency.”

The CEB contains an unequally weighted basket of reference stocks. It allocates 20% to MicroStrategy and 18% to Square. Both of these organizations are led by prominent Bitcoin bulls, Michael Saylor and Jack Dorsey, respectively. More importantly, both companies own Bitcoin as a treasury asset on their balance sheet.

However, Joshua Greenwald, chief risk officer at Uphold — a cryptocurrency platform — told Cointelegraph why these stocks could have an adverse impact on investors: “This may prove a dangerous way to get exposure to BTC, as pressure on management for holding large BTC positions might create additional downside leverage on a selloff.”

CEB puts the auxiliary crypto ecosystem in the spotlight

Along with the companies directly holding Bitcoin, even firms that are related to the cryptocurrency industry in an auxiliary fashion were put in the spotlight as well due to their perceived high correlation with Bitcoin. In the CEB, Riot Blockchain and Nvidia Corporation are given allocations of 15% each. The four mentioned companies account for 68% of the debt instruments’ total allocation.

Riot Blockchain is a cryptocurrency mining company whose stock has been on an absolute tear since February, showing high correlations with Bitcoin. In addition to being related to Bitcoin due to its mining operation, Riot also owns 1,175 BTC on its balance sheet, valued at around $68 million, which accounts for 1.6% of its overall market capitalization on Nasdaq.

Nvidia Corporation is a graphic processing units manufacturer, which is now also used in mining proof-of-work cryptocurrencies like BTC and Ether. The rate at which PoW cryptocurrencies are mined is highly dependent on the power and functionalities of the GPUs being used.

The growth of companies such as Riot and Nvidia is directly linked to Bitcoin’s growth due to their participation in the cryptocurrency ecosystem. This applies to all the exchanges trading Bitcoin products, to energy companies that are getting into Bitcoin mining, and even to payment platforms like PayPal that support Bitcoin.

The other crypto auxiliary stocks that are a part of JP Morgan’s CEB are PayPal Holdings, Advanced Micro Devices, Taiwan Semiconductor Manufacturing Company Limited, Intercontinental Exchange, CME Group, Overstock.com and Silvergate Capital Corporation. All of these companies are related to crypto and Bitcoin in one way or another, right from being part of the mining and energy process to having Bitcoin products listed on their exchange, as is the case with CME and Bakkt, which is owned by ICE.

However, one stock missing from this basket is the Tesla stock. On Feb. 8, Elon Musk’s company bought BTC worth $1.5 billion at the time. This move alone pushed the price of Bitcoin by $3,000 within minutes, showing the impact Musk and Tesla have on the crypto markets. In fact, the CEO’s effect on the crypto market is now famously referred to as the “Musk Effect.” Considering all this, it would be obvious to include Tesla’s stock on the CEB. But JP Morgan’s reason for excluding Tesla’s stock could be that it feels that Tesla’s stock is “dramatically overvalued.”

Even Sam Bankman-Fried, CEO of FTX — a cryptocurrency derivatives exchange — mentioned to Cointelegraph how Tesla had an interesting correlation with BTC:

“TSLA is probably the most interesting: Both are speculative assets; they have overlapping investor bases; Tesla owns some BTC; and both often move on Elon Musk’s tweets. MSTR is a more boring example.”

Crypto exposure through CEB is limited

Although JP Morgan’s CEB could be a “gateway drug” for traditional financial market investors to get into cryptocurrency, the true exposure the basket would give investors to Bitcoin seems limited, according to Weiss:

“Most people are investing in the technology company side of a company like MicroStrategy and less of the Bitcoin side despite its large Bitcoin exposure. This is because when comparing holding the stock and holding Bitcoin directly, if you want to be exposed to Bitcoin, Bitcoin is still the best way to get exposed to it.”

In addition, the potential of high fees for working with legacy systems like those at JP Morgan could also be a concern. Greenwald opined on this: “Following good security hygiene and using a relatively simple-to-use custodial provider will likely prove more cost-effective than the annual fees of most managed solutions.”

Additionally, the CEB is not the only way for retail and institutional investors alike to get exposure to Bitcoin through traditionally regulated markets. Grayscale’s Bitcoin Trust has established itself as a forerunning choice for institutional investors to get exposure to Bitcoin. It is in fact the largest public holder of Bitcoin in the world. It currently owns 649,130 BTC, which is currently valued at around $37 billion.

Related: Bitcoin ETF may come to US, but not all crypto investors think it’s needed

On top of Grayscale, two Bitcoin exchange-traded funds have launched in the Canadian markets called Purpose ETF and Evolve ETF. Within a month of their launch, both ETFs combined to have close to a total of $1 billion as their BTC assets under management. Bankman-Fried opined further on the viability of the CEB, saying:

“You can try to do it and get some correlation — so, it’s not totally useless. But in the end, there will be significant investor demand for BTC, or at least for crypto companies. I’d guess they’re better off going internationally for listed crypto companies.”

Over and above these methods, there are other ways institutions could get exposure to Bitcoin. One major strategy apart from buying Bitcoin as a treasury asset could be to enable digital payments channels. Amazon and Facebook could be the most logical choices for this. Facebook could very well be the first major social marketplace to enable digital payments through its own stablecoin, Diem, formerly known as Libra. Diem is due to launch in 2021 and is touted to be a game-changer among crypto payments, stablecoins and even central bank digital currencies.

While it is a great sign that JP Morgan is trying to get in on cryptocurrencies, the debt instrument seems like a Bitcoin ETF in sheep’s clothing with limited upside to Bitcoin as compared to holding the asset itself. Due to this, it’s highly unlikely that seasoned investors will flock to it in the long run, especially when all the Bitcoin has been mined and scarcity begins.

Morgan Stanley, a competing investment bank, has taken another route to provide Bitcoin exposure to its clients. On March 17, it announced Bitcoin investing for its wealthy clients. The investment bank has an AUM of $4 trillion and will allow premium clients to invest in Bitcoin through Galaxy Digital’s Bitcoin Fund, Institutional Bitcoin Fund and FS NYDIG Select Fund. There will be an allocation cap for clients at 2.5% of their overall portfolio.

This move is indicative of the fact that now is not the time to seek alternative exposure to BTC, given that it’s still at an early stage of adoption. ETFs and such pseudo-ETFs could be a solution in countries where investors are limited by restrictive regulations. Otherwise, there seems to be no real alternative to actually buying and hodling Bitcoin.

Bitcoin price facing final resistance before $68K?
What does it mean to be bullish or bearish in crypto?
Comment