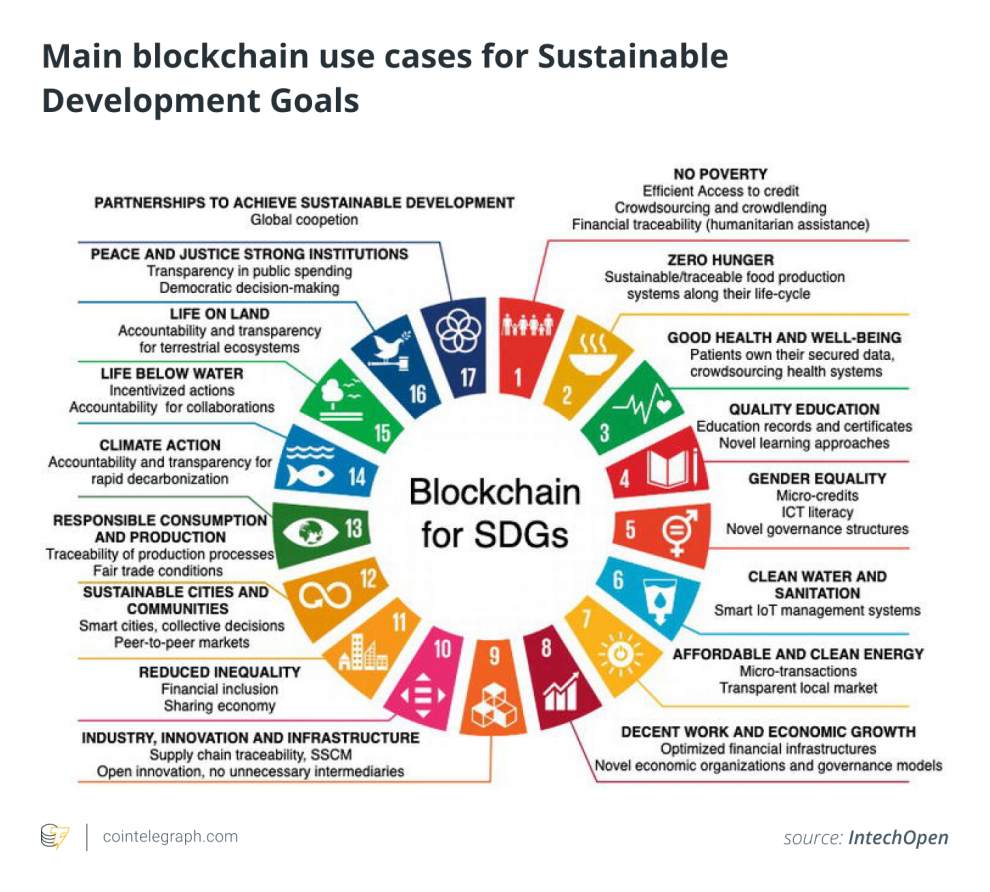 The United Nations Climate Change Conference of November 2021, known as COP26, in Glasgow, Scotland urged the world to commit to curbing contributions to carbon emissions. Achieving a net-zero world in less than 30 years is causing many to turn to blockchain technology, buy carbon offsets, and spark renewed interest in carbon capture.

The United Nations Environment Programme (UNEP) has identified transparency, clean energy, carbon markets and climate finance as areas where blockchain technology can accelerate climate action. At the 2017 Paris Summit, the UN Climate Change Secretariat joined a multi-stakeholder group of organizations to establish an open global initiative, the Climate Chain Coalition, signaling its early support for blockchain for the climate.

At the Middle East and North Africa (MENA) Climate Week, UNEP, the International Association for the Advancement of Innovative Approaches to Global Challenges (IAAI GloCha), and the United Nations Economic and Social Commission for Western Asia drew together blockchain stakeholders in the MENA region to shape a common understanding of the technology’s potential for supporting countries with climate action, which was followed by the Blockchain4Climate networking event. Drawing from these discussions, I will shed light on how we use blockchain to address climate action.

Although the digital asset industry has been slammed for its high energy consumption, such an accusation is misleading. It is essential to differentiate between cryptocurrencies and underlying blockchain platforms that are energy efficient and underpin climate initiatives. Few climate initiatives leverage cryptocurrencies. Algorand has declared its blockchain to be entirely carbon-neutral; Kickstarter is building a crowdfunding platform on the carbon-negative blockchain platform Celo; and SavePlanetEarth is setting up certified Carbon Credit Smart nonfungible tokens (NFT) on Phantasma, a green blockchain for developers to build their decentralized applications. The game is on, and platforms are transitioning to more sustainable energy and consensus mechanisms. Polkadot has also been highlighted as a climate-friendly blockchain.

We are seeing a maturation and proliferation of such projects as people innovate for climate action — e.g., TreeCoin sells tokenized assets tied to eucalyptus trees and reinvests them in eucalyptus trees in Paraguay. Carbonland Trust also has a tokenized carbon credit for forest conservation, while the Cambridge Centre for Carbon Credits is looking to purchase carbon credits to fund nature-based solutions preserving biodiversity. ClimateCoin incentivizes the offsetting of carbon emissions by awarding tokens to persons who plant trees or reduce CO2 emissions. Carbon Offsets To Alleviate Poverty supports projects that reward farmers who plant and maintain trees on under-utilized portions of their land. Evercity is working with GloCha on a green chain solution toward COP28, the 28th session slated for Nov. 6–17, 2023.

Several projects are also focussing on tradable carbon credits. Universal Protocol allows certified projects to turn greenhouse gas reductions into tradable carbon credits. First, NFT-based carbon credits provide carbon credit issuers access to the blockchain and enable users to track, trade and burn credits. Moreover, organizations such as Evercity and Blockchain Triangle are robust integrated platforms that guide and aggregate initiatives and carbon credits, linking them to investors and financial mechanisms, such as digital green bonds through blockchain-driven platforms. The capacity to include these voluntary market credits in national reporting under the Paris Agreement is also being addressed through initiatives such as Blockchain for Climate and its Bitmo platform and the Open Earth Foundation and its Nested Climate Accounting for the Paris Global Stocktake.

New technologies that significantly reduce fabrication costs and the massive adoption of mobile phones in developing countries make it possible for solar panels to be connected to the blockchain to enable consumers to benefit from distributed generation. Azuri Technologies, Zola Electric and Mobisol produce low-cost solar panel solutions for off-grid areas in rural Africa. This smart “pay as you go” system makes solar technology affordable at a fraction of the price of kerosene, allowing households to pay off solar panels, which helps them move from renting to owning an asset. This can transform the lives of off-grid rural citizens, making them owners of cutting-edge technology, building a healthier, safer home environment and supporting additional sustainability initiatives.

NFTs are increasingly being leveraged for climate change, with initiatives ranging from raising awareness to fundraising; moreover, NFTs are used as an immutable record for impact and carbon credits. SavePlanetEarth is launching certified Carbon Credit Smart NFTs. First Carbon Corp. is developing NFT-based carbon credits, whose issuers will have access to the blockchain, enabling users to track, trade, and burn credits so that there is no double counting.

Related: Despite the bad rap, NFTs can be a force for good

Another NFT use case is DigitalArt4Climate, a multi-stakeholder partnership initiative that uses blockchain technology to turn art into digital assets or NFTs, which can be collected and traded, unlocking the potential for resource mobilization, youth engagement and climate empowerment.

DCarbon founder​​ Adi K. Mishra points out that you can also use gameplay to incentivize widespread positive climate action. GreenApes deploys gamification to help people understand their carbon footprint, and we can expect to see more games where people can play to earn for climate action.

Blockchain technology will be a critical tool for measurement and reporting in combination with artificial intelligence and the Internet of Things (IoT) with large-scale interconnected databases — e.g., climate, water, land — to develop action for desertification and deforestation and predict weather events and trends. Blockchain smart contracts offer a tamper-proof and zero-cost mechanism to connect positive (or negative) environmental changes or outcomes to financial incentives/disincentives — e.g., a measurable reduction in CO2 measured by an IoT-based network of atmosphere monitoring sensors placed around a village can “trigger” the release of crypto to the village based on the observed measurement in the environment.

Blockchain technology can create new​ ​digital ​economies that ​unite ​and ​economically​ ​align people around ​a common ​purpose. It is possible to develop economies that value climate action. IAAI GloCha presented its United Citizens organization for climate empowerment plans at MENA Climate Week, which will be a flagship initiative at COP28.

I will provide a deeper dive into each of these opportunities in the coming weeks.

This article does not contain investment advice or recommendations. Every investment and trading move involves risk, and readers should conduct their own research when making a decision.

Jane Thomason is the chairperson of Kasei Holdings, an investment company specializing in the digital asset ecosystem. She holds a Ph.D. from the University of Queensland and has had multiple roles with the British Blockchain & Frontier Technologies Association, the Kerala Blockchain Academy, the Africa Blockchain Center, the UCL Centre for Blockchain Technologies, Frontiers in Blockchain, and Fintech Diversity Radar. She has written multiple books and articles on blockchain technology. She has been featured in Crypto Curry Club’s 101 Women in Blockchain, the Decade of Women Collaboratory’s Top 10 Digital Frontier Women, Lattice80’s Top 100 Fintech for SDG Influencers, and Thinkers360’s Top 50 Global Thought Leaders and Influencers on Blockchain.