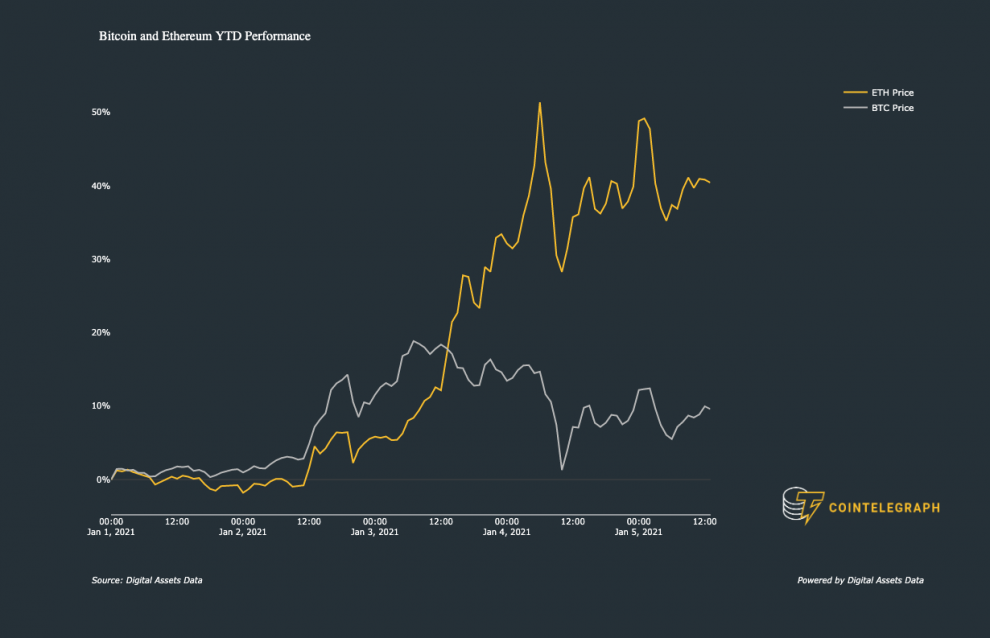 Americans who received their second coronavirus stimulus checks on Dec. 29 have already gained 12% — if they invested it in Bitcoin (BTC).

As the United States government rolls out another round of “free” money to eligible residents, attention is fixed on how many will choose to invest their $600 in cryptocurrencies.

The handouts began last week and are expected to be completed by Jan. 15. According to a dedicated monitoring resource, those who received the money on the first day and who immediately swapped their U.S. dollars for BTC are already up around $75.

Bitcoin and Ether (ETH), the largest altcoin by market capitalization, have outstripped practically all competition in the first week of 2021 when it comes to returns on investment.

As mainstream media overflows with tales of how stimulus recipients plan to invest in stocks and consumer goods, notionally with the goal of “stimulating the economy,” those who bought Bitcoin with the previous cash gift in April 2020 are now sitting on $5,600.

At the time, the stimulus check was worth $1,200 — twice the amount of the second round — meaning Bitcoin has supplied gains of 370% if you “hodled” until now.

The figures underscore the curious way in which the average taxpayer can benefit from the bizarre financial environment that characterizes 2020 and 2021. By simply buying and holding Bitcoin, anyone can outpace even the most seasoned equities trader.

“Maybe we should be sending out the stimulus money in Bitcoin. The $600 will turn to $2,000 in a week anyways,” fund manager Austin Rief summarized in a tongue-in-cheek tweet over the weekend.

Monthly chart shows Bitcoin is not done at $32,000

While 233% gains in a week have yet to come true, many are already confident of Bitcoin’s prospects to match or even beat last year’s performance in 2021.

The year after a block subsidy halving has historically been the cryptocurrency’s best, and under that logic, a correction will only be due in 2022.

Added to this is data showing longer-term behavior following a price top in each four-year halving cycle. With $20,000 as the previous top, history suggests that BTC/USD will not dip below that level again.

Bitpay’s CCO says Bitcoin could hit $45K in a month, but there’s a catch
Binance hits record high of $80B in daily volume as crypto markets surge
Comment