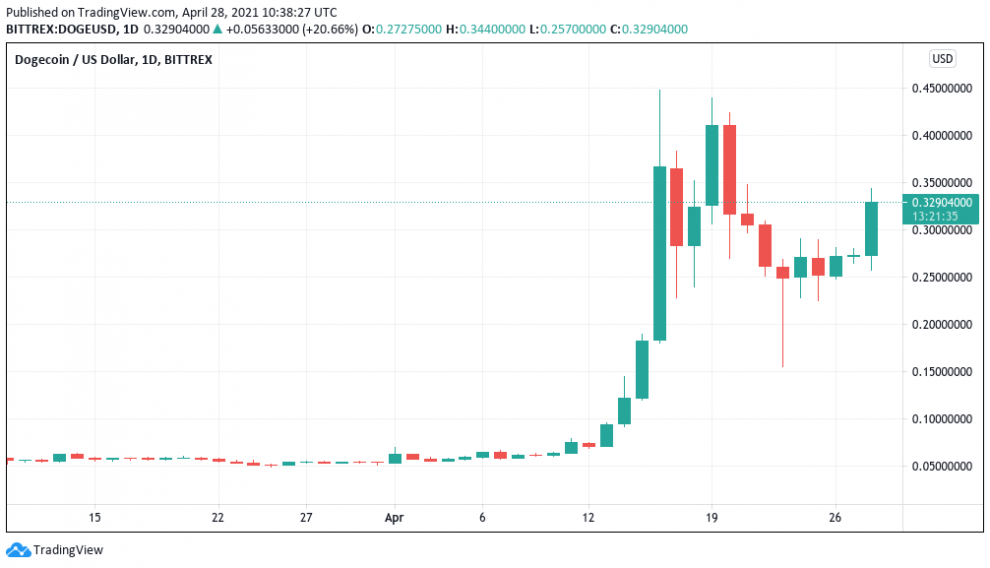 Dogecoin (DOGE), the meme-based cryptocurrency that is a pet favorite of Elon Musk, has a new date for its price diary — Musk’s appearance on Saturday Night Live.

In a tweet on Wednesday, Musk described himself as “The Dogefather” as he prepares to host the popular American television show on May 8.

The Dogefather
SNL May 8

Musk is well known for his PR stunts when it comes to Dogecoin, with social media posts often sparking price gains — something which has also benefited Bitcoin (BTC).

A familiar scenario for Dogecoin fans, Musk’s latest round of publicity immediately fuelled a rebound in DOGE/USD, which was up 20% in hours at the time of writing.

Bitcoin’s previous price dip had cost the altcoin sector dearly, with DOGE bottoming far below its recent record high of $0.47.

That peak had also been caused in part by Musk, who had promised to “put a literal Dogecoin on the literal moon” via the latest rocket launch of one of his companies, SpaceX.

Last week saw an improvised “holiday,” dubbed “Dogecoin Day,” attempt to run up the DOGE price to a stratospheric $4.20 in time for the launch, a move which ultimately fell far short of expectations.

Bitcoin continued to range, meanwhile, failing to cement $55,000 support in a boon for those expecting a continuation of “alt season 2.0.”

“This recent recovery in Altcoin Market Cap is much sharper than the post-retrace recovery in February,” popular Twitter account Rekt Capital commented on Tuesday, comparing different retracements in 2021.

“Even the actual -17% April retrace itself is shallower than the one back in February. These are all signs that point to a strong interest towards Altcoins in general.”

Unsubstantiated rumors that Facebook would announce a BTC allocation in its quarterly earnings due later on the day provided some bullish counterpoint to the mood.