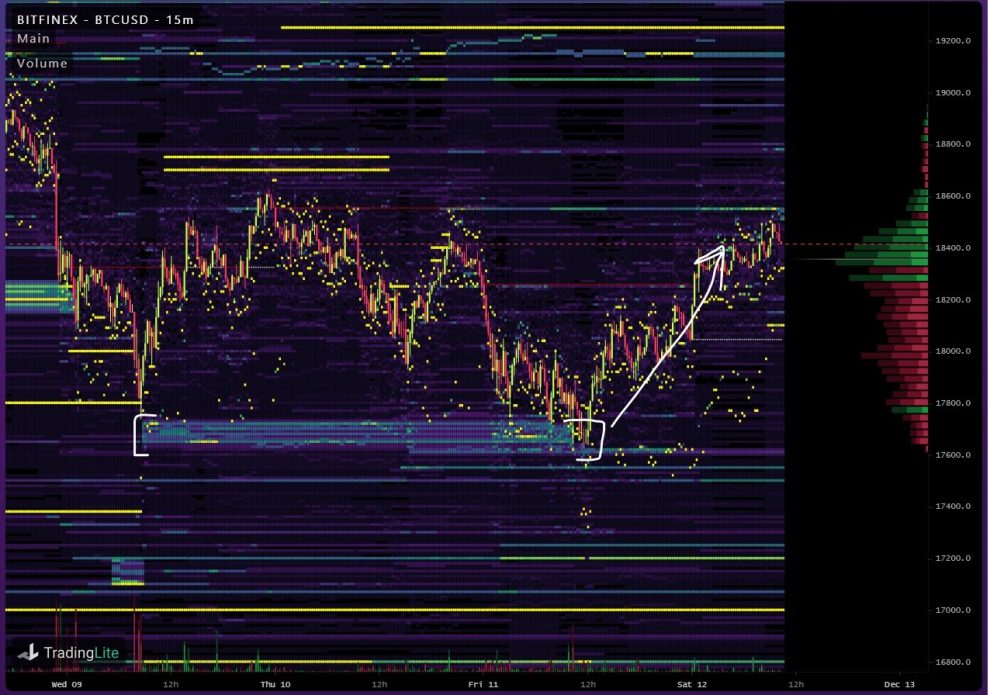 The price of Bitcoin (BTC) has started to rally once again on Dec. 13, rising above $19,200 after dropping to sub-$17,600 on Friday. The significant increase in buyer demand in that area indicates that BTC may have just seen a short-term bottom.

When Bitcoin initially dropped to around $17,700, on-chain analysts, including Edward Morra and Nik Yaremchuk, pinpointed large buy orders on Bitfinex and Coinbase.

As soon as the BTC price briefly dropped below $17,700, it started to rebound quickly, reclaiming $18,000 within three hours.

Is this the new Bitcoin run-up to the all-time high?

Conventional technical analysis suggested that the logical Bitcoin bottom would likely be established at $17,000. It marked the top of a weekly candle in January 2018, and it is also a major support area on lower time frame charts.

Morra noted that Bitcoin may have appeared to recover randomly at $17,600 if traders were not observing exchange heatmaps.

“Finex whale protecc, Note that regular charts looked pretty ugly and price bounced out of nowhere to you if you didn’t watch heatmaps.”

Yaremchuk, a cryptocurrency trader and an on-chain analyst, shared a similar sentiment when Bitcoin hit $17,600. On Dec. 11, the trader said:

Bitcoin rebounding from $17,600 is highly optimistic because it printed a higher low formation on the 4-hour chart. This means that the bottom of the recent correction is higher than the previous bottom — a trend often spotted during rallies.

The Bitcoin price also began to rally after it surpassed $18,800, which Cointelegraph identified as a potential whale cluster area and key resistance level.

Next levels to watch

In the near term, there are two key factors to consider. First, as Cointelegraph consistently reported, Bitcoin sell-pressure remains relatively high. Second, this would mark the second retest of the all-time high since Nov. 30.

There is an argument to be made that there is now less selling pressure in the near term since miners and whales sold-off heavily last week. In other words, this was the much-anticipated correction and the bullish U-turn has been confirmed.

The probability of new all-time highs increases further if Bitcoin surpasses the $19,400 resistance next with low selling pressure.

A pseudonymous trader known as “Beastlorion” said that the lack of sell pressure may trigger a big rally in the short term, saying:

“The price action on $BTC right now is something else. There’s like 0 sell pressure. It feels like the price is getting pulled up at this point instead of pushing up. Just look at those volume bars. Big pump coming IMO.”