Bitcoin (BTC) has rebounded by more than 25% after bottoming out at $30,000 during the May 19 crash. But the cryptocurrency continues to tread ahead under the possibility of facing another period of strong sell-offs owing to a classic technical indicator pattern.

Bitcoin price in a “bearish pennant”

Dubbed a “bearish pennant,” the pattern forms when an asset consolidates after a strong move downward and forms a small symmetrical triangle-like price range. It breaks below the range support and continues moving lower. Traders usually estimate the size of the negative breakout move by measuring the height of the earlier move.

Bitcoin is currently trading inside a similar bearish pennant structure, fluctuating sideways as it forms a sequence of lower highs and higher lows. Meanwhile, its consolidation structure precedes a massive move downhill to around $20,000. Therefore, if the BTC/USD exchange rate breaks below the pennant structure and is accompanied by rising trade volumes, its likelihood of crashing by almost $20,000 is high.

Meanwhile, market analytics service Income Machine is warning of a “dead cat bounce” scenario emerging in the Bitcoin market, noting that upcoming rallies in BTC/USD could face limitations by further selling pressure near the May 26 highs (the $39,000–$41,000 area). It recommended traders exit their bullish positions near $40,000.

What’s more, Income Machine also noted that a failure to hold $30,000 as support would risk crashing Bitcoin prices to $16,200 — a level that coincides with the bearish pennant target. The analytics firm selected $16,200 because of its historical relevance as support during the November–December 2020 session.

“Conversely, an upside break of the May 26 highs would cause us to reverse our analysis and adopt a more bullish outlook for BTC-USD,” added Income Machine analysts.

“Traders would be keenly watching these levels before taking any decisive action. That said, the risk to the Bulls remains higher compared to that of Bears, as longer-term price action is in a downward direction.”

Balani also noted that the current price action signifies demand in the $30,000–$35,000 range. Therefore, an upward swing from the said area could end up breaking the bearish pennant — which Balani referred to as a symmetrical triangle — to the upside.

“BTC is forming a classic symmetric triangle and any breakout/breakdown will lead to a significant price move,” he said, adding: 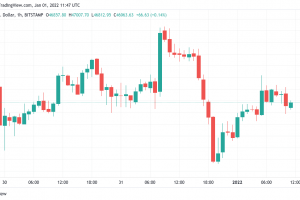