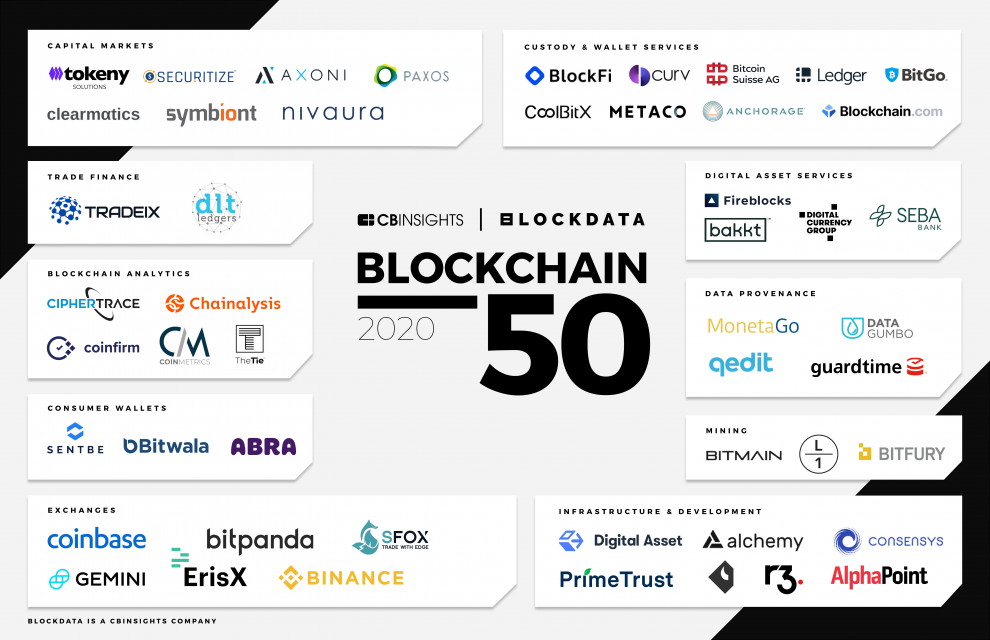 Research firm CB Insights and Blockdata, the data company acquired by CB Insights in September of this year, have unveiled their first-ever annual “Blockchain 50” list, which consists of 50 private companies applying or analyzing blockchain technology to solve business- or consumer-related problems across various industries.

Jonathan Knegtel, CEO and co-founder of Blockdata, told Cointelegraph that the Blockchain 50 list represents an annual ranking of the 50 most promising companies within the blockchain ecosystem. Specifically speaking, Knegtel noted that this year’s companies are tackling consumer and enterprise use cases:

“This inaugural class of the Blockchain 50 consists of companies that are tackling a range of use cases in categories like capital markets, custody and wallet services, exchanges, and more. These companies are paving the way for enterprise blockchain as the industry matures and moves onto full deployment, and we look forward to monitoring their successes in the coming years.”

Knegtel further mentioned that analysis from Blockdata and CB Insights focused exclusively on privately held companies that have raised equity funding. “We did not include open-source projects such as Bitcoin and Ethereum,” he remarked.

Although open-source projects are of critical importance for the blockchain ecosystem, Knegtel explained that companies such as R3, BitGo, Chainalysis and Coin Metrics were considered, all of which have displayed success in achieving or building a path to commercial adoption.

Additionally, Knegtel shared that the companies featured on the Blockchain 50 list consist of early-stage startups along with well-funded unicorns. For example, Knegtel remarked that 10% of the 50 winners are valued at or above $1 billion as of their latest funding round. “The five unicorn companies on this year’s list are just a few of the major companies that are backed by a number of notable investors and are showing stable growth,” he said.

U.S., U.K. and Switzerland stand out

While the Blockchain 50 list includes innovative companies from across the globe, it’s interesting to point out that the majority of companies included are based in the United States. According to the “Blockchain 50 world map,” North America is home to leading blockchain companies like Coinbase, ConsenSys, Abra and more. Coincidentally, the U.S. also ranks as the number one country for blockchain patents, even though the Chinese firm Alibaba has filed countless patents this year.

Although this is the case, Knegtel noted that 40% of the 2020 Blockchain 50 companies are based outside the United States. He mentioned that the United Kingdom and Switzerland rank next in terms of housing innovative blockchain companies:

“The United States is home to a majority of the Blockchain 50 companies, as it is still the primary funder of projects that have gained traction. However, we’re seeing major blockchain initiatives being launched by corporations and governments worldwide. In fact, many of the Blockchain 50 companies are headquartered in Europe, in countries like the United Kingdom and Switzerland.”

Specifically speaking, eight of the companies listed in the Blockchain 50 report are based in the U.K. and Switzerland. This shouldn’t come as a surprise though considering recent innovations in these regions.

For example, Switzerland’s Federal Department of Finance has taken initiated a process for enabling blockchain-focused laws throughout the region. The Federal Council aims to enforce these laws starting as early as August 2021.

The U.K. has also been making progress in encouraging cryptocurrency adoption, which may result in a blockchain-friendly region to conduct operations. For instance, the U.K.’s Financial Conduct Authority has recently established a temporary registration regime for crypto companies seeking approval. The U.K also announced new regulatory proposals for stablecoins, along with expressing interest in a central bank digital currency.

How the Blockchain 50 were selected

As the Blockchain 50 list contains a number of interesting findings, it’s important to point out the process behind selecting the companies mentioned.

Knegtel explained that winners were selected from a pool of 2,700 companies. In order to ensure a fair and comprehensive list, Knegtel explained that the companies chosen were based on a number of factors including business models, market potential, competitive landscape, investor and team profiles and data submitted by the companies. “Blockdata’s intimate knowledge and experience in the blockchain ecosystem helped to identify the needle movers from the rest of the pack,” Knegtel said.

It’s also important to mention that Mosaic scores were leveraged, which is CB Insights’ proprietary algorithm that measures the overall health and growth potential of private companies. These are based on CB Insights’ National Science Foundation-backed algorithm that assesses a company’s health using three metrics: market, to determine how healthy the industry the company operates in; money, to evaluate the financial health of the company; and momentum, to determine how much traction the company generates.

Based on the current Blockchain 50 list, Knegtel shared that 32% of the cohort raised equity funding at a seed or Series A round, which shows that there are many young and promising companies in the blockchain ecosystem.