The markets are bleeding out. Ether (ETH) dropped from $500 to $300 in a matter of days, people are screaming that the DeFi bubble has burst already, and are crying about their favorite “[insert food name] coin” crashing in value after a one-month-old Twitter account rug pulled 38K ETH from investors.

Yes, it’s just another week in crypto, but did anyone else notice that Tron (TRX) was pumping amidst all this?

Might just be a coincidence, but the last time this happened so quickly the entire crypto market bled out in the long, cold crypto winter. 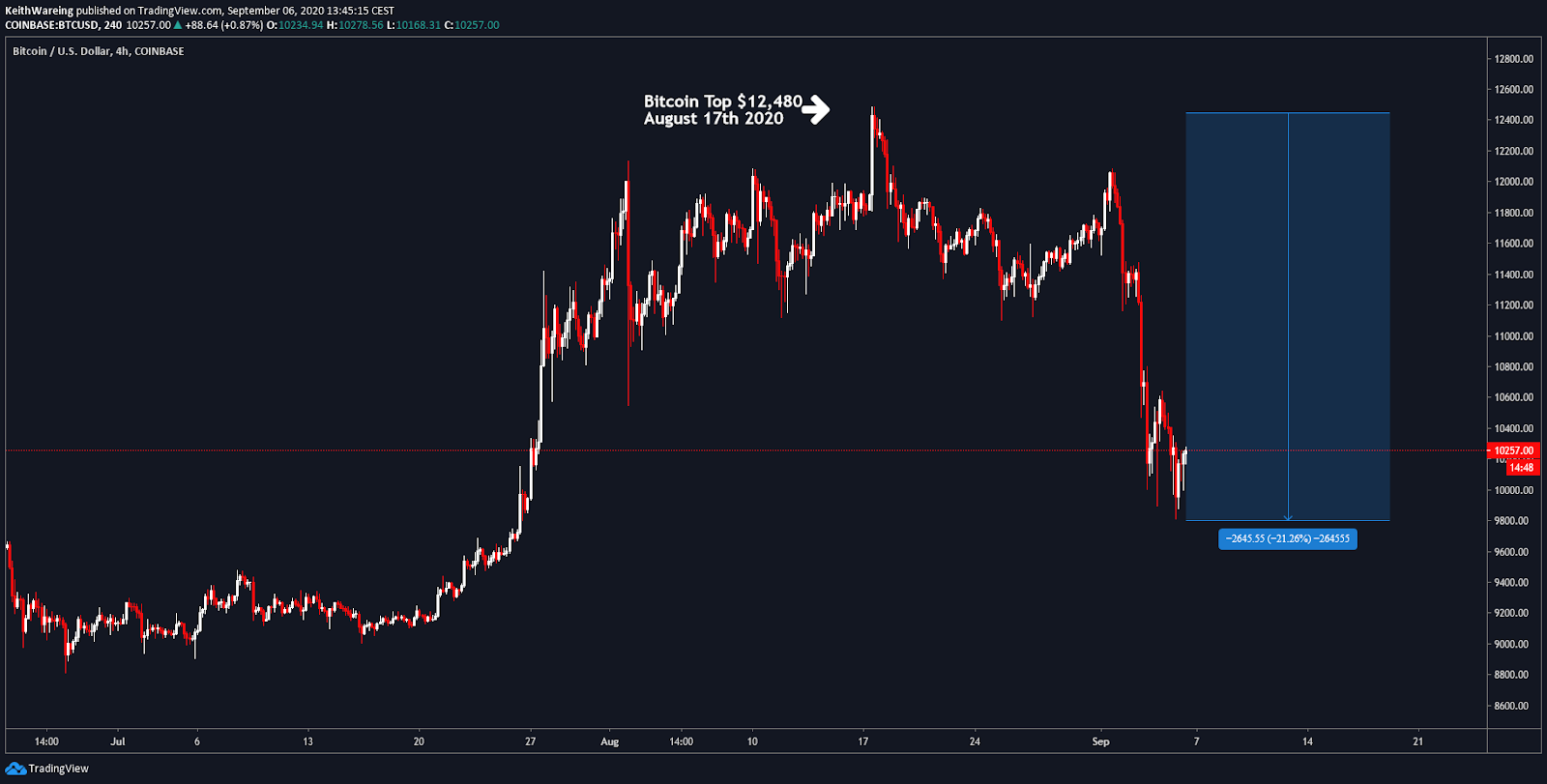 Bitcoin has shed 21% of its dollar value after dropping from $12,500 to sub $10K levels in just two weeks, leaving the popularized “Bart” pattern staring us in the face.

But when the leading digital cryptocurrency by market capitalization makes such a dramatic move, it pulls (for the most part) every other crypto asset down with it.

The top of this particular chapter in the history of Bitcoin was about $12,500, with many now questioning where the bottom could lie. So in this week’s analysis, I will look at three potential scenarios of how to identify the bottom. 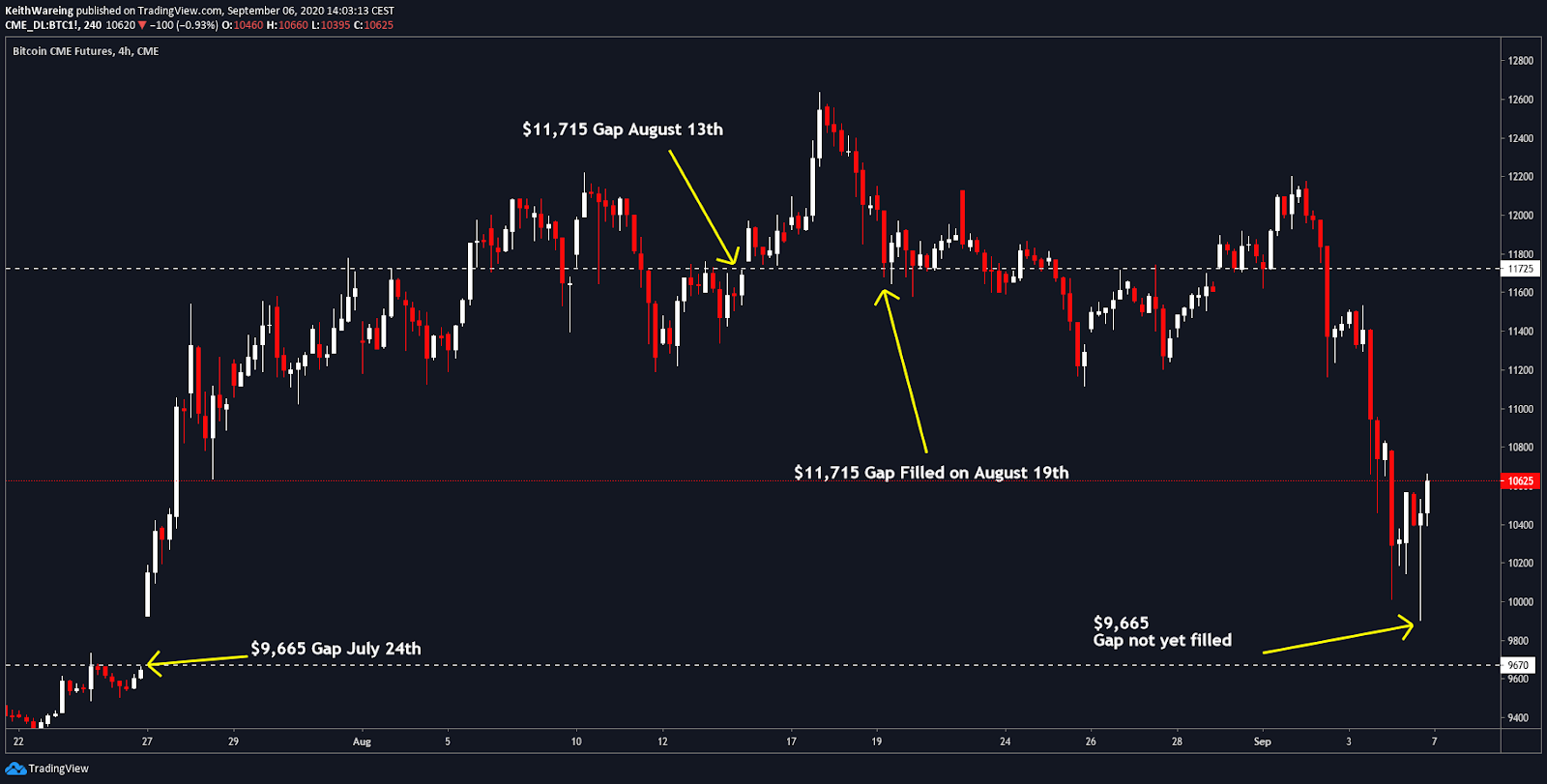 Most seasoned Bitcoin traders are aware of the CME gap, for those yet to be exposed to this sorcery let me explain. Bitcoin is a 24/7 tradable asset. The CME, however, is only actually open 23 hours per day, beginning Sunday evening at 5∶00 pm Central Time and ending at 4∶00 pm CT Friday afternoon.

This means there are windows where gaps can occur, typically these occur on weekends when the market closes on a Friday and reopens on a Sunday evening. However, traders can still trade the asset 24/7 using what the CME refers to on their website as the following:

“Rule 526, and EFRPs (Exchange for Related Position), pursuant to Rule 538, may be negotiated/executed 24/7 and must be submitted for clearing during the appropriate clearing session.”

This means that orders can still be placed when the market is closed as far as the charts are concerned, which means orders can get left unfilled, and this is where the gap comes in.

As the price fell past the gap price on Aug. 19, 2020, the gap is then considered “filled” and one can only assume that orders left behind at this level were then filled.

However, the price of Bitcoin has continued to bleed out, and we have printed a new local bottom of $9,905 on the CME chart, which is now just $240 shy of filling a gap left on July 24.

This is where it gets rather opaque. The gap range on July 24 is between $9,665 and $9,925, leaving the question of whether the gap must still be filled? Or whether the gap partially filled.

As the wick entered the gap range, it did not reach $9,965, thus not closing the gap entirely. Does this mean there are still orders waiting to be filled at $9,665?

We don’t know, and this leaves some speculators believing the gap has been filled, and another camp believing it is yet to be filled. 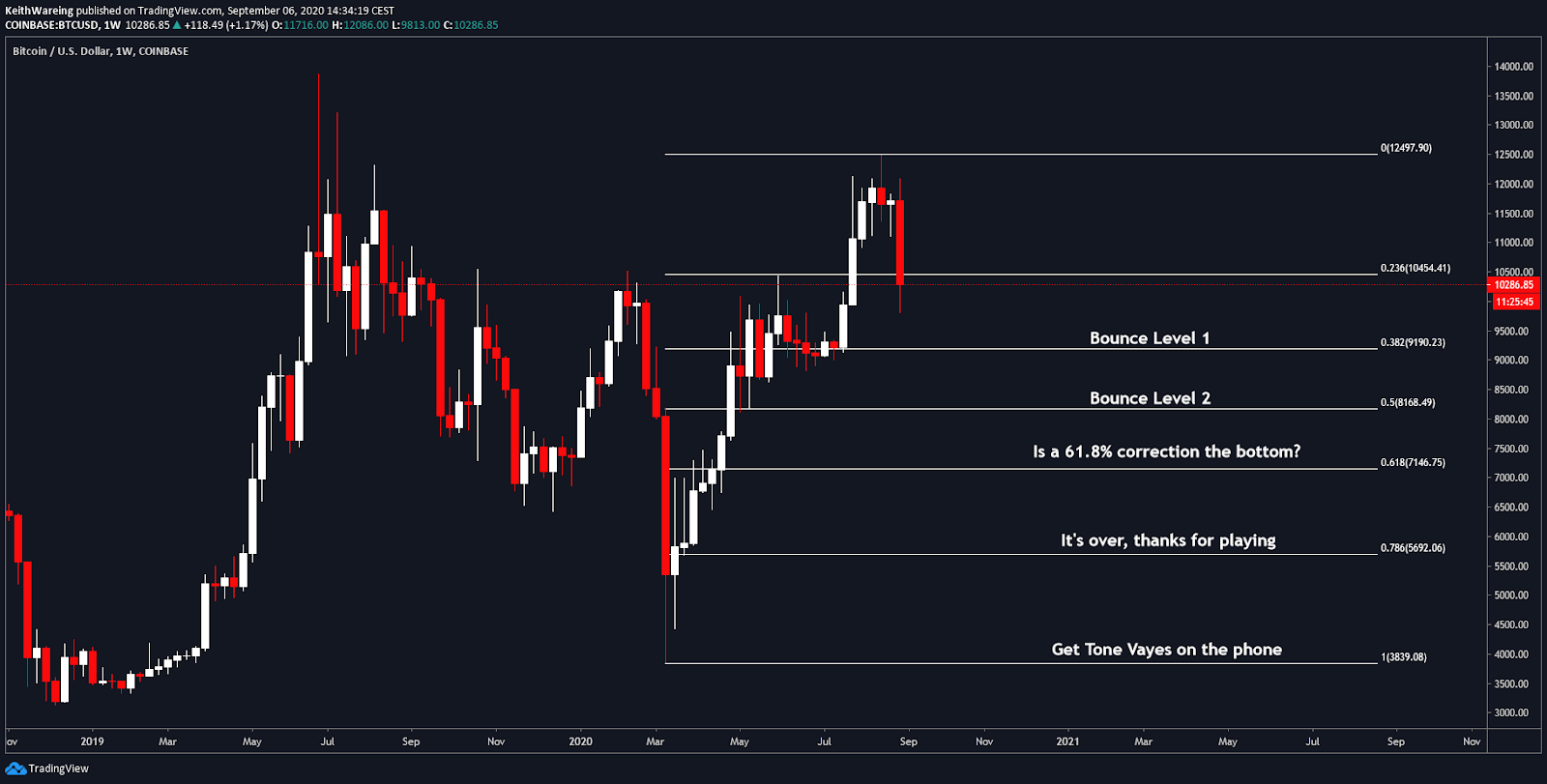 Moving aside from the CME magic, technical traders are already eyeing up $7K areas as support. One analyst @officiallykeith (*ahem* that’s me btw) tweeted on Sep. 4:

Shortly after the same levels were echoed by popular trader Scott Melker (@scottmelker), who said:

“Point to remember – from here, a retrace to the low $7000s would still be considered “healthy,” hitting a 61.8% golden pocket retracement before heading to new highs. That would actually be considered “normal” after the move from the March lows. Would scare everyone.”

Whilst the prospect of hitting the 0.618 Fibonacci level might frighten many people, the more seasoned Bitcoin hodlers amongst us such as @Davincij15 were quick to assure crypto twitter that this is all part of the game. He noted:

A reminder to us all that neither hodling nor trading Bitcoin is going to be easy, but to date, it has seldom been wise to bet against Bitcoin. As such we now have two potential bottoms in sight, $9,665 or around $7,100.

However, there is a third less-conventional indicator that might hold the answer… 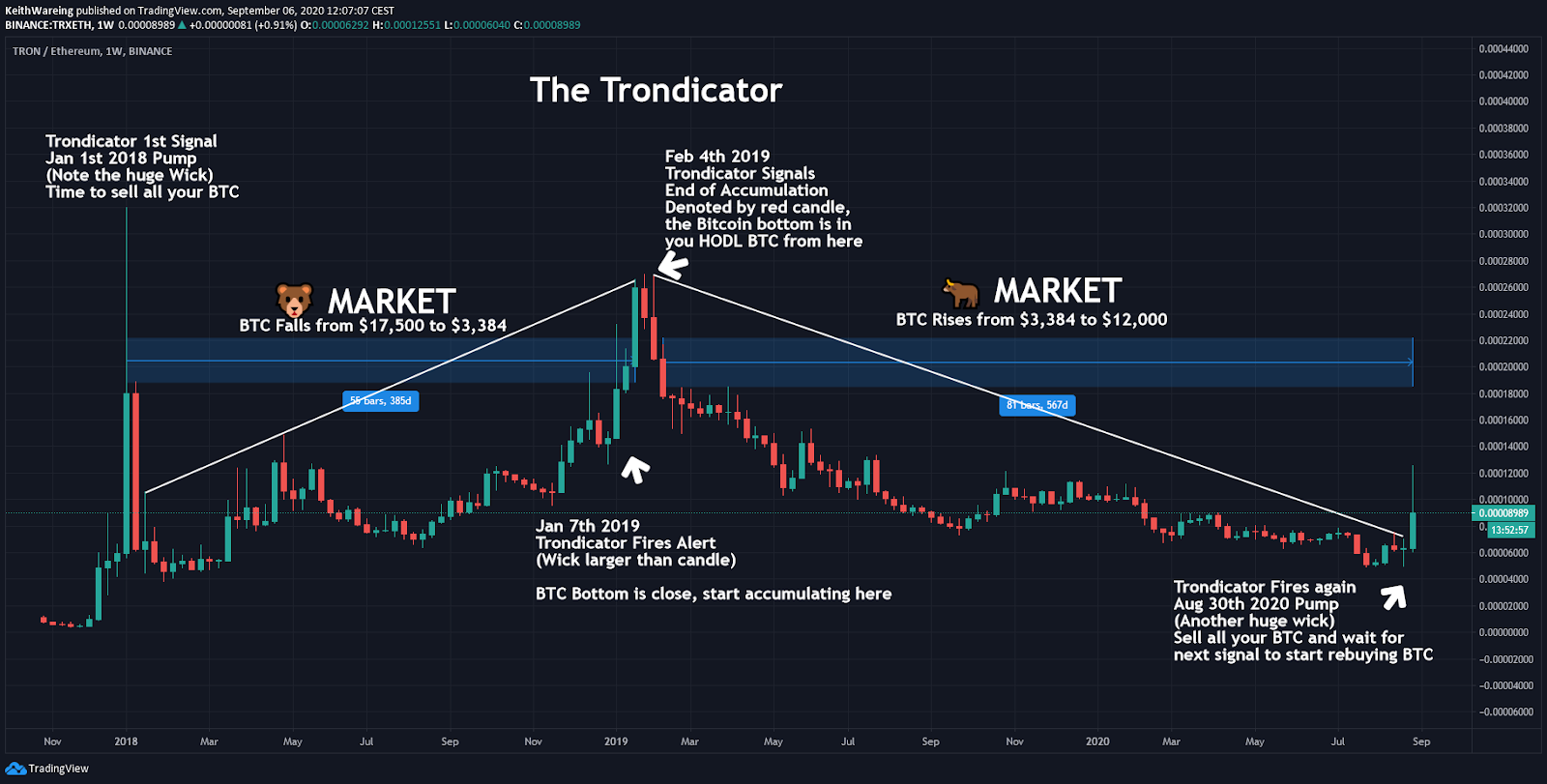 So let’s talk about Tron for a second. My last 10x trade of the 2017 bull market actually happened at the beginning of 2018, and that was on TRX.

We all know what happened after January 2018. The crypto bear market was thrust upon us, and altcoins started heading toward zero. But what is interesting about Tron and, in particular, its chart history, is that whenever Tron prints a candle with a wick near enough the same size as the candle itself, strange things happen to the crypto space as a whole.

This isn’t immediately noticeable on TRX/USDT charts, as Tron started life as an ETH pairing. So when you look at the TRX/ETH chart on the weekly, you start to see a pattern clearer than the Bart we are looking at on today’s BTC chart.

The first time we saw this type of longtail pump candle, the bear market started. The second time it happened was the week commencing Jan. 7, 2019, followed by a longtail dump candle on Feb. 4, 2019 — the exact period that Bitcoin found its bottom around $3,300.

So here we are again, the Aug. 30 weekly candle is a green long-tail candle on Tron and the markets are all going to pot. So maybe, just maybe, the bottom will be signaled when Tron prints another candle with a wick equal to the size of its body again.

Losing the 0.618 would pretty much signal that we’ve had our bull market, now it’s time to keep an eye on the Trondicator.

The CME gap effect is very real. I have witnessed first hand an immediate price correction after the CME gap has filled. As such, since the gap has partially filled, we may have already seen the bottom. The first bullish sign would be closing above the 0.236, which is around $10,454. Should BTC hold this level, then I expect the bull market to resume.