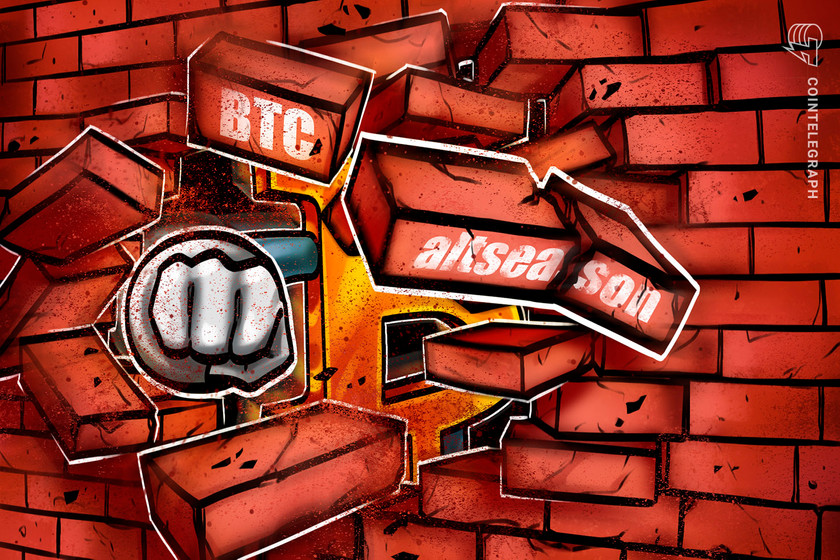 On Dec. 8, exactly one month ago, Bitcoin was hovering around the $18,700 range, with many analysts debating as to whether the flagship asset would be able to sustain its bullish momentum and cross its all-time high value close to $20,000. Well, how quickly things have changed since then because within a period of just 30 days, Bitcoin (BTC) has repeatedly scaled up to new ATHs, even surpassing the $41,000 barrier.

Over the course of the last seven days, BTC has exhibited a substantial growth of around 41%, with the digital asset seemingly breaking new ground with each passing day. However, this has led to investors becoming increasingly nervous since there are many who immediately are given flashbacks of the 2018 crash that resulted in most cryptocurrencies crashing hard within a matter of days.

In this regard, Cointelegraph Markets contributor Michaël van de Poppe believes that while 2020 was an amazing year for crypto, everyone should brace for a “healthy correction” in the near future. That being said, for many, that can serve as an opportunity like no other because there is an increasing population of budding crypto enthusiasts who now want a piece of the action, and not just Bitcoin. On the matter, van de Poppe opined: “The higher Bitcoin goes, the more money comes into the market and more money can flow towards altcoins.”

The reasons for Bitcoin’s momentum are manifold, starting with the fact that the industry as a whole had been in a prolonged bear market all through 2018 and 2019, but despite the slumps, accumulation had never really stopped.

Another often overlooked narrative is related to the recent BTC halving, as time and again, historical data has indicated that approximately four to six months after every cycle, the value of the premier digital currency takes a sharp upward turn — something that has happened this time around as well.

Not only that, but the digital asset seems to be right on track with the stock-to-flow model, which was created by Dutch institutional investor PlanB. According to the S2F model, scarcity is used as the defining metric to quantify the value of Bitcoin. And while most people use the setup to assess BTCs future valuation, PlanB claims that the S2F model can also be used in relation to gold and silver, as well as other assets.

Ben Zhou, CEO of cryptocurrency exchange Bybit, confirmed that it’s the “institutional inflow fueling Bitcoin,” adding that there is now a level of consensus, or at the very least, peer pressure among certain corners of the institutional world to have Bitcoin in their portfolio: “Certainly, those that have a younger clientele feel the need to increase their exposure to BTC.”

Omar Chen, CEO of the ZB.com exchange, believes that institutional buying has simply served as a catalyst for Bitcoin and has not been the primary driver for its bullish momentum. He told Cointelegraph that investors, both from the traditional and the crypto sectors, are in fact on the lookout for alternative safe havens, pointing toward gold and its rally during the start of the COVID-19 pandemic:

“As people and institutions learn more about its attributes and benefits, Bitcoin has become another haven of choice for money. Combined with the recent spate of negative news about COVID-19 vaccines, investors are increasingly losing faith in traditional finance and the global economic recovery, making the bullish case for Bitcoin even louder.”

Are altcoins inextricably linked to BTC?

As Bitcoin marches on, even crossing the $41,000 threshold, there is no denying that the surge has also seen a number of prominent altcoins soar to new heights. In this regard, over the course of the past week, Ether (ETH), Stellar (XLM) and Cardano (ADA) have showcased prominent gains of 70%, 128% and 70%, respectively.

But will the financial destiny of the market’s top-10 altcoins always be linked to Bitcoin? So far, the value of ETH and Litecoin (LTC) have continued to showcase heavy correlation with BTC whenever the latter witnesses any major market movement. However, Ether may be coming into its own as an independent asset, even though it has yet to break past its 2018 ATH of $1,448.

Thor Chan, CEO of digital asset exchange AAX, opined that even though the term “alt season” is often used whenever Ether or some other altcoins start to surge, its meaning has changed over time. He pointed to the 2017 market when everything had to do with an explosion in innovation around initial coin offerings and about people “getting rich as quickly as possible.” Since then, he believes the market has evolved greatly: “Now, the growth in altcoins is more about portfolio diversification, risk management and rebalancing as traders realize their Bitcoin profits.”

It is worth recognizing that most altcoins, barring a few such as ETH, still largely fall outside the radar of institutional interest. However, with Bitcoin being promoted the way it has been, many mid- to large-scale investors might be looking at ETH and other prominent alts as potential candidates for the next wave of adoption. In this regard, Jay Hao, CEO of cryptocurrency exchange OKEx, highlighted to Cointelegraph:

“It is natural that there will be some spillover into other cryptocurrencies with Ethereum being the first in line as a well-established and long-term project in the industry. While BTC most certainly has the strongest brand recognition, Ethereum has not gone unnoticed, being used by the largest FSIs like JPMorgan and Santander.”

He further noted that Ether has very strong fundamentals and, as a result, has piqued the interest of serious institutional investors, such as TD Ameritrade and Arca Labs. Not only that, but Ethereum is the platform of choice for many cryptocurrency projects and has been behind the huge DeFi momentum that took off in earnest last year.

Hao believes that while Bitcoin has effectively been given the green light, as has Ether to a certain degree, from institutional investors, the same cannot be said for all other cryptocurrencies: “I don’t believe that we can say with confidence that the alt season will be as large or as long as the previous, as the majority of the institutional dollars are still flowing into BTC.”

Is the crypto hype real?

While the narrative of “Bitcoin being a bubble” is yet to play out, there are still those from the traditional finance sphere who continue to reiterate the statement as a mantra, hoping that their anti-crypto sentiments do come true at some point.

For example, just last month, renowned economist David Rosenberg told Bloomberg that he believes Bitcoin is in a bubble and investors don’t understand how its supply works, adding: “Everybody seems to believe that we’re going to get to that 21 million cap on the supply constraint, but there’s really nothing in the protocol to suggest that the supply of Bitcoin can’t go up once we hit that limit.”

As a wise man once said, “Facts don’t care about your feelings,” as is highlighted by the fact that the crypto industry is seeing unprecedented institutional demand for Bitcoin, especially with the entrance of many key players, such as MicroStrategy, Guggenheim, SkyBridge Capital, Square and PayPal into the space. Additionally, the Office of the Comptroller of the Currency has recently given U.S. banks the authorization to treat public blockchains as another form of settlement infrastructure and also allowed for banks to offer custody services of digital assets.

When it comes to altcoins, the world’s largest financial derivatives exchange, the Chicago Mercantile Exchange group, has finally announced its plans to launch a new ETH futures product in early 2021. As a result of this development, come February, traders will have the opportunity to speculate on Ether’s future monetary valuation using a fully regulated setup.

The offering, referred to as the CME CF Ether Reference Rate, will help expose crypto to a wide array of investors, traders and investors, allowing for better price discovery and, eventually, increased adoption within institutional circles.