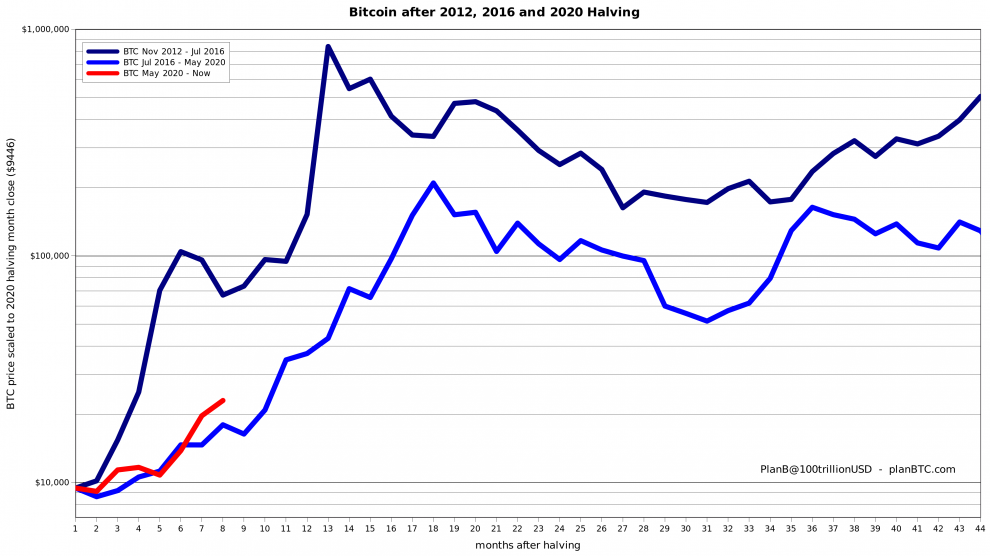 In a tweet on Dec. 17, the creator of the stock-to-flow price model noted that in its current halving cycle, Bitcoin’s growth is going as planned.

Despite huge volatility this week, stock-to-flow remains conspicuous in its ability to forecast the pace of change in Bitcoin price over extended periods.

Critics have argued that Bitcoin cannot repeat its behavior from the last bull cycle — specifically from 2017 — and gains this time around will be less pronounced while taking longer to materialize.

Comparing performance since May (the date of Bitcoin’s third block subsidy halving event) with the performance after the first and second halvings in 2012 and 2017, this year could not be a more textbook result, says PlanB.

“R.I.P. ‘lengthening cycles’ and ‘diminishing returns,’” he summarized alongside a fresh chart.

Bitcoin’s run to highs above $23,000 further allowed it to fill in empty space on the stock-to-flow model. Prior to that, at just below $20,000, BTC/USD was in fact underperforming compared with the model’s demands.

As Cointelegraph reported, however, even in November, Bitcoin was already beating its performance from the 2016 halving.

To the chagrin of its skeptics, a rapidly increasing number of institutional financiers are beginning to share this view — and putting their money where their mouth is to prove it.

This week, One River Asset Management revealed a plan to up Bitcoin and Ether (ETH) exposure to over $1 billion by early 2021. Guggenheim, which reserved the right to allocate part of its own capital to BTC, now says a fair value for Bitcoin is $400,000 — 1,600% higher than the all-time high seen on Thursday.

Only a few new outliers tow the line for the bears. Among them is Claude Erb, the asset manager famous for writing “The Golden Dilemma,” a report arguing against the precious metal’s utility as a hedge against unexpected inflation.

In a new paper titled, “Bitcoin is Exactly Like Gold Except When it Isn’t,” Erb produces a new price model loosely tied to network effect which gives a maximum theoretical value of $74,000 per Bitcoin.

“Bitcoin has no track record as an inflation hedge, a store of value and a safe haven,” its abstract reads.

“Bitcoin’s price can arguably be decomposed into a questionable ‘bitcoin network’ fair price and a fair price deviation. Both bitcoin and gold are about 50% above their ‘fair prices.’”