Bitcoin (BTC) may have only held $10,000 for a matter of hours, but according to glassnode, an on-chain monitoring resource, this moon is not like others in 2020.

On July 26 Glassnode uploaded surprising data about Bitcoin’s latest trip to five figures and suggested that the current journey above $10,000 will be much different than the last few.

As Cointelegraph reported, BTC/USD suddenly crushed the last remaining resistance below $10,000 on Sunday, rising to hit highs of $10,200.

The excitement was short-lived, with the pair then dropping to circle the $9,900 level at press time.

Bitcoin has passed $10,000 several times in 2020, but Glassnode’s analysis suggests that this time differs from the rest because of the Bitcoin days destroyed indicator.

Bitcoin days destroyed is a measure of the value of each BTC transaction, taking into account how long it has been since the coins involved last moved.

Previously, jumps above $10,000 resulted in an increase in the Bitcoin days destroyed metric, suggesting that long-term holders were using the opportunity to trade or sell.

So far, however, the weekend’s optimism has yet to repeat the trend. 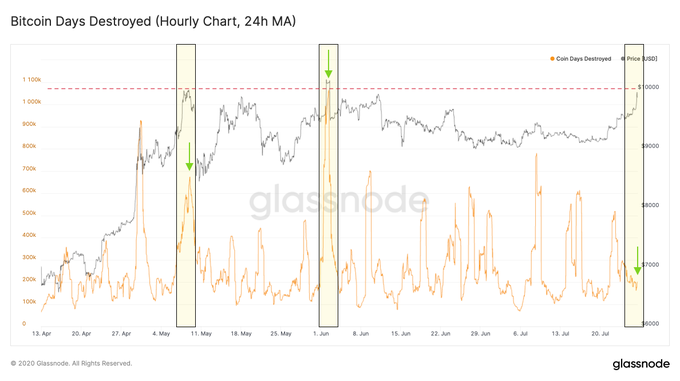 Cautious optimism that Bitcoin is destined for higher levels still has become a theme in itself among traders in recent months.

When PayPal sparked rumors of crypto acceptance in June, for example, talk immediately turned to Bitcoin’s potential to seal not only $10,000, but as much as $12,000 in the short term.

Network fundamentals remain encouraging, while Sunday’s spurt similarly marks a firm contrast to the pattern of compression that Bitcoin exhibited in prior weeks. A cycle of higher lows and lower highs had placed BTC/USD in a narrowing corridor that analysts agreed must soon break.

Altcoins were similarly bullish on the day, with Ether (ETH) breaking firm resistance at $280 in a move which surprised even more than Bitcoin. At press-time levels revolved around $310.