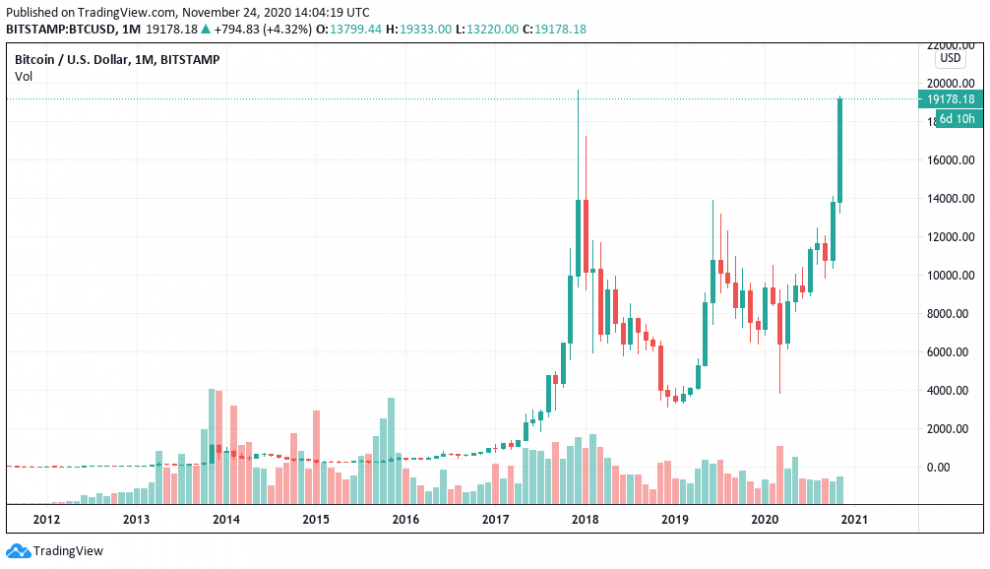 Bitcoin (BTC) is currently having its second-highest trading day ever as BTC/USD is hitting a new multiyear high of $19,330.

Data from Cointelegraph Markets and TradingView provides a cause for celebration on Nov. 24 after Bitcoin suddenly tackled $19,000 resistance.

Against a backdrop of rapid gains and the temptation of breaking all-time highs around $20,000, the achievement has not gone unnoticed on Bitcoin figures.

Ryan Selkis, founder of data resource Messari, noted that on only one day in its existence has Bitcoin traded above even $19,000.

By contrast, the largest cryptocurrency has now spent 283 days above $10,000 — including its longest-ever stint in 2020.

…And its best-ever month

Meanwhile, Bitcoin has gained more in U.S. dollar terms than any month in its history, data shows. In a tweet on Nov. 24, quantitative analyst PlanB highlighted that the past three and a half weeks have been unlike any other period in Bitcoin’s lifetime.

The largest cryptocurrency continued to climb on Tuesday after retesting $18,000, adding over $1,300 to its U.S. dollar price in under 24 hours.

For PlanB, the performance indicated that Bitcoin was not only beating records but would deliver even bigger gains in the near future. This was down to its relative strength index (RSI), which had begun to enter the zone that signals a protracted Bitcoin price uptrend.

“Slowly but surely this is beginning to look like (the start of) a bull market,” PlanB commented.

“Best ever #bitcoin month in $ terms (+$5400) and RSI crawling towards bull market levels.”

As Cointelegraph reported, PlanB noted that RSI was strong at the beginning of November, not signaling that Bitcoin was overbought despite its price growth.