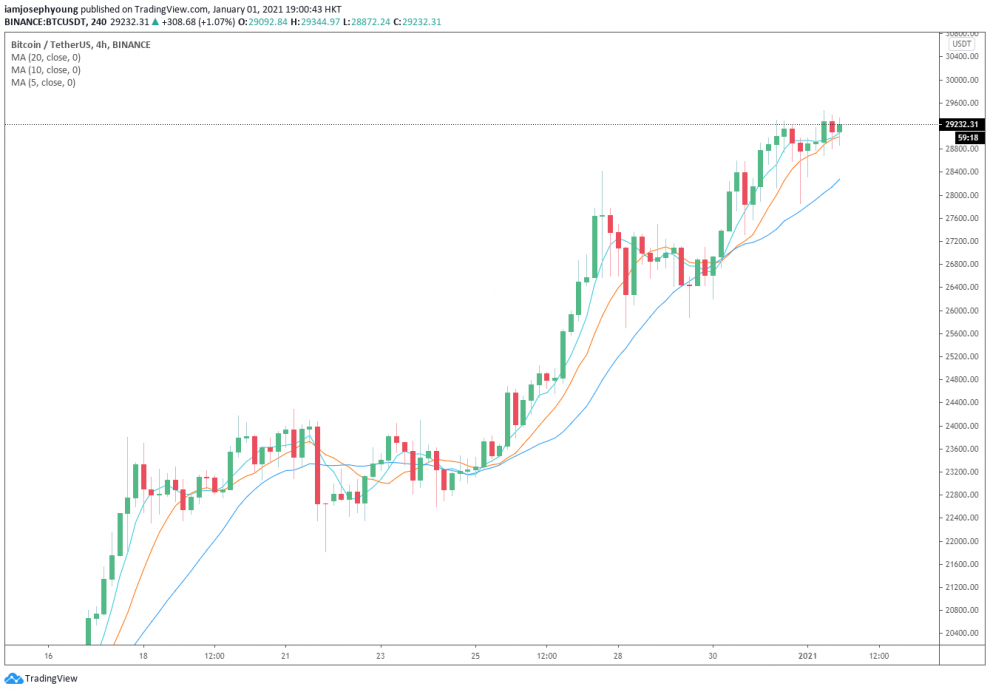 The price of Bitcoin (BTC) reached a new all-time high above $29,400 across major exchanges on Friday. In other words, BTC is just 2% away from reaching the psychological resistance level at $30,000.

Breaking $30,000 could fuel renewed confidence in the market, with the last remaining technical roadblock right below this level.

Hence, in the near term, sellers will look to defend the $30,000 resistance level with stacked sell orders. Exchange order books show large sell orders in the $29,800–$30,000 range.

$29,800 is critical for another leg up for Bitcoin

Exchange order books on both Binance and Bitfinex show relatively large sell orders from $29,800 to $30,000. This means that sellers could attempt to lead a Bitcoin pullback before it reaches $29,800.

A pseudonymous cryptocurrency trader known as “Loma” similarly said that if Bitcoin was to reject at $30,000, it would likely drop from $29,800. He said:

Traders in the Bitcoin futures market have been trying the suppress the price of BTC and have shorted aggressively in the past 24 hours.

The futures funding rate on Coinbase and other major exchanges have remained at around 0.01%, despite the recent rally. At times, it fell below 0.01%, indicating that the majority of the market was shortin or selling BTC.

That funding rate is a New Year gift I be leave $BTC #Bitcoin pic.twitter.com/GSPCDnZuKu

However, retail investors in the Bitcoin spot market, which refers to exchanges without derivatives and leverage, have been accumulating BTC.

On Dec. 31, shortly before the new year, the price of Bitcoin rallied to a new all-time high. Analysts at Santiment said that they spotted an increase in on-chain movements, which might indicate retail accumulation.

Since Coinbase saw a large premium over other major exchanges, like Binance, retail investors on Coinbase likely bought Bitcoin entering into the new year. The analysts said:

“As #Bitcoin’s markets opened on 2021 for the first time about 30 minutes ago (UTC), prices have jumped to $29,460 as $BTC has made yet another AllTimeHigh. Active addresses are on the rise in recent hours to support this push.”

In the near term, Bitcoin will likely see a battle between futures short-sellers and retail investors in the spot market as the price reaches closer to $30,000.

In the near term, the key is to see Bitcoin’s behavior at $29,800. There is a strong possibility that it pulls back without surging to that level, which could lead to a decent-sized correction.

If BTC surges past $29,800 without much difficulty, then a broader rally above $30,000 becomes probable in the foreseeable future.

As Cointelegraph reported earlier this week, Bitcoin will look to extend its gains in the first quarter of 2021, several metrics suggest.