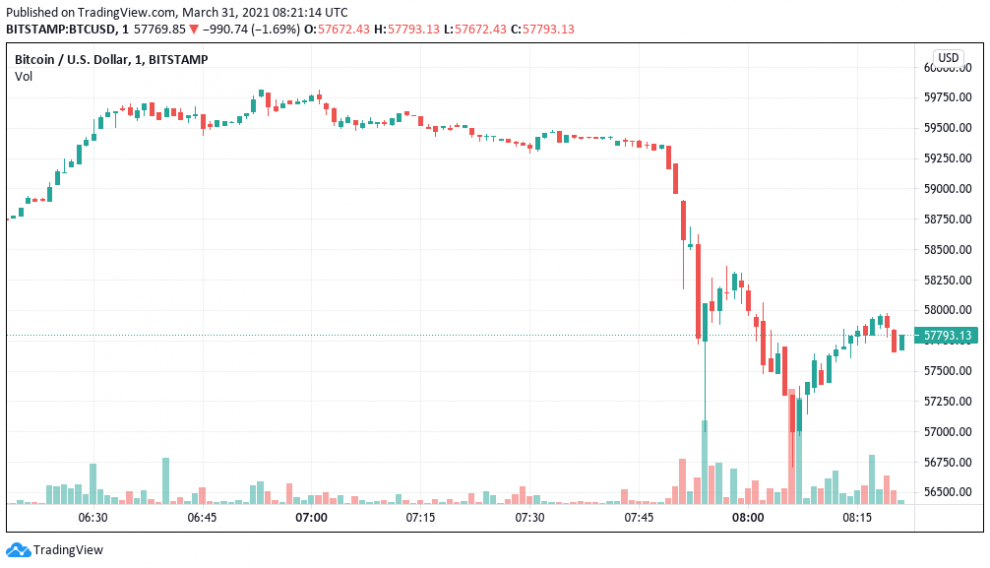 Bitcoin (BTC) fell over $2,000 in five minutes on March 31 as a wave of volatility disrupted an otherwise calm market.

Cointelegraph Markets Pro and Tradingview showed a nightmare for long traders unfold on Wednesday, with BTC/USD suddenly dropping from $59,350 to $57,000.

At the time of writing, the losses were still mounting after the pair hit lows of $56,713 on Bitstamp.

“Exactly Bitcoin,” trader Michaël van de Poppe reacted to what has become a familiar event on short timeframes for Bitcoin.

Previously, upside had been the focus for day traders as news from PayPal spawned a run-up to just below $60,000.

Those betting on a continuation of the bull run lost big on Wednesday, however, as the downturn liquidated long positions worth $600 million amid a 24-hour total wipeout of $1 billion.

For quant analyst PlanB, their demise was nonetheless beneficial, helping to rid the market of unwanted leverage and ensure more organic future rises. As Cointelegraph reported, similar events have occurred with both long and short positions in recent months.

“Now that all leveraged longs are liquidated, we finally have room for breaking $60K in April.”

Meanwhile, indicators showed reason to believe that further price increases for Bitcoin would need some work.

Funding rates across derivatives platforms were higher on the day, reaching as high as 0.375% on Huobi, a classic sign that downward pressure is incoming.

The longer-term picture remains more than positive, with analysts pointing to $68,000 and $73,000 as the next hurdles to watch.