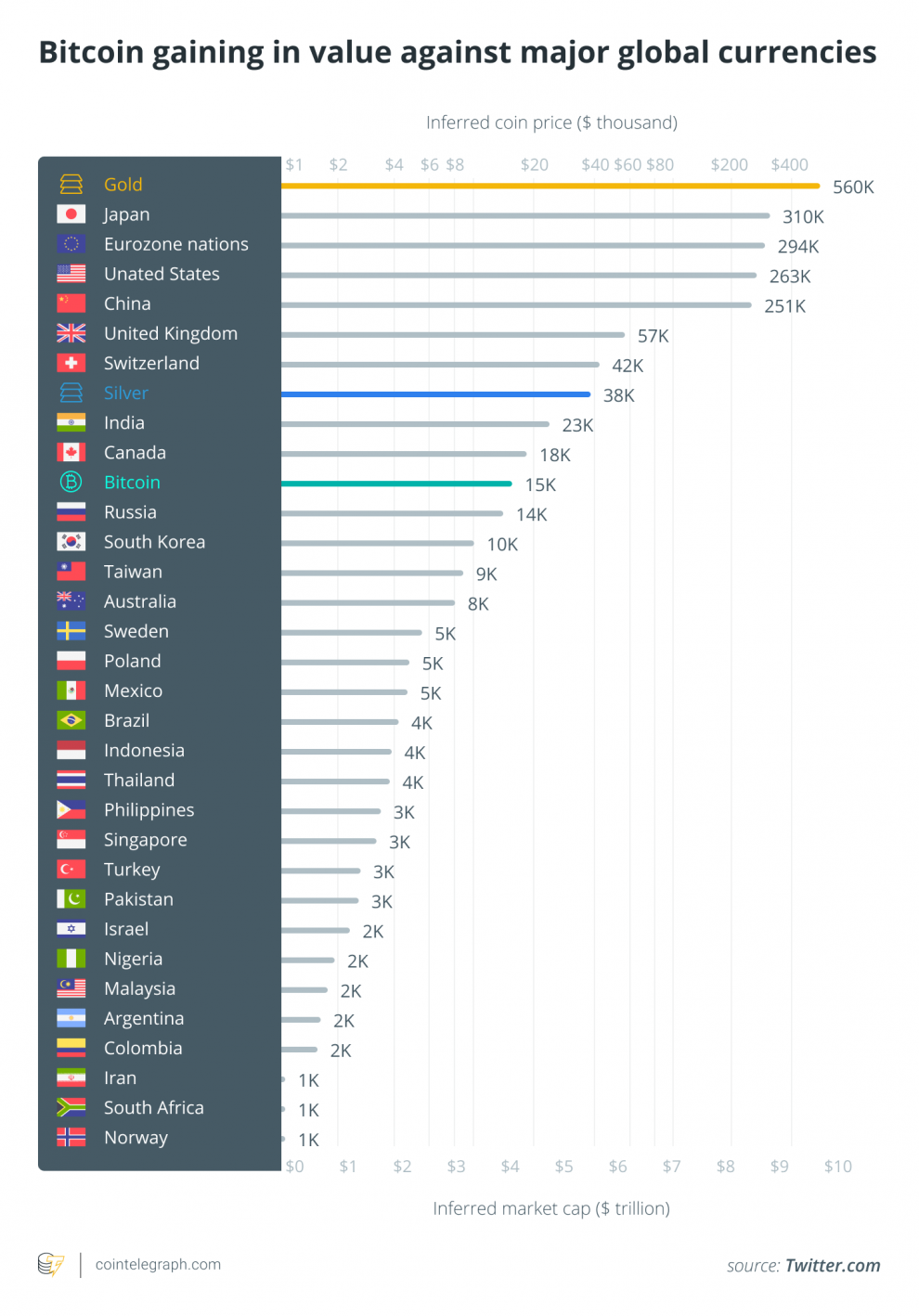 Bitcoin being regarded as “sound money” is a common refrain among many proponents of the popular cryptocurrency. With a finite supply of 21 million and a network secured by over 120 exahashes per second of computing power, the consensus among industry commentators has often leaned toward it becoming a global monetary superpower.

Barely a decade into its existence, Bitcoin’s inferred value is already the 11th-largest global monetary base. Earlier in November, Bitcoin became larger than the Russian ruble for the first time in history.

While fiat currencies buckle under economic strain exacerbated by the coronavirus pandemic, Bitcoin (BTC) has continued on its upward trajectory for most of 2020. Even though the price fluctuations are much more volatile, BTC is up about 120% year-to-date despite the Black Thursday event, a substantial decline suffered back in mid-March.

With economic recovery plans likely involving considerable stimulus packages, such cash injections are expected to cause significant devaluation in fiat currency values. If Bitcoin follows through on the parabolic advance predicted by numerous market analysts, it stands ready to move even higher up the global monetary base log.

The entire record of world reserve currency history remains consistent with the fact that monetary bases rise and fall. In the six monetary epochs since 1450, no currency has maintained global dominance for more than 110 years. With the U.S. dollar standing at 95 years of being the world’s reserve currency, some are hoping this is a sign that things may change soon.

Despite being the most gold-backed fiat currency in the global market, the Russian ruble now has a lower monetary base than Bitcoin. With the ruble losing further ground to the U.S. dollar and BTC jumping to the $16,000 mark, 1 BTC now equals 1.2 million rubles. Up next for Bitcoin in its assault of major currencies is the Canadian dollar. Based on its current circulating supply, a move above $18,000 for BTC would see it overtaking the CAD.

As previously reported, Bitcoin is already at all-time highs against seven national currencies including those of Brazil, Argentina and Turkey. Rising inflation exacerbated by economic stagnation occasioned by COVID-19 has negatively impacted several fiat currencies.

For now, Bitcoin’s all-time high remains the $19,665 attained during the December 2017 bull run. However, for Bitcoin to begin to challenge the premier global currencies like the U.S. dollar, Chinese yuan and Japanese yen, it will need to reach a six-figure price, according to John Todaro, research head at institutional trading platform TradeBlock, who told Cointelegraph:

“We could see Bitcoin surpass other major fiat currencies, but it depends on how one measures the size of an FX market. The New Zealand Dollar (‘kiwi’) is at the lower end of the group and the most susceptible to being passed by Bitcoin but currently sees over $100 billion in daily trading volume, which is well above that of Bitcoin. Unlike other hard money assets, Bitcoin does see high trading turnover, so even at a modestly higher market cap, Bitcoin’s notional trading volume could be quite a bit higher than it is today.”

The parabolic advance required to propel Bitcoin to such heights would also place BTC firmly in the same category as gold — as a bonafide store of asset value. Several proponents of the popular cryptocurrency already identify BTC as a suitable hedge against monetary debasement and other forms of economic uncertainty.

Amid interest rate cuts back in 2019, Travis Kling, founder and chief investment officer of Ikigai Asset Management, warned that the prevailing debt situation at the time was a recipe for another global financial crisis. According to Kling, central banks were propping up growth metrics to portray the impression of a healthy economy. When Kling made these comments, the world was yet untouched by the coronavirus pandemic.

Bitcoin featured frequently in the discussions around possible safe-haven assets that could be used as a hedge against another global recession. Amid the COVID-19 panic of selling off assets, BTC did not escape the massive liquidation of Black Thursday, proving that it has not yet achieved that coveted status. The largest crypto by market capitalization crashed by almost 50%, bottoming out at about $3,800. However, in exactly eight months since then, BTC’s price is up over 300%.

Commenting on the possibility of Bitcoin reaching a new all-time high in the short term, Todaro remarked that it will be tough to establish a sustained push toward the record before the end of 2020, adding further: “This bull cycle should bring us well beyond prior ATHs on a longer-term basis and with government spending increasing and the May halving behind us, we are set up for one of the most attractive bullish periods in Bitcoin’s history.”

Joe DiPasquale, the CEO of crypto hedge fund BitBull Capital, also sees Bitcoin setting a new all-time high during this current bull run, telling Cointelegraph: “It is very likely [that Bitcoin reaches a new all-time high] since Bitcoin has now crossed $16,000, which was a key resistance level. $20,000 is not that far off from this point unless any major negative developments impact the market in the short-term.”

While inflation remains a real concern for many countries, 2020 has been a pivotal year for Bitcoin in terms of supply dynamics. The May halving event saw the supply of new Bitcoin cut by half.

Meanwhile, several governments in response to the economic strain induced by COVID-19 adopted proactive monetary policies including stimulus cash injections. According to World Bank estimates, global gross domestic product is expected to decrease by 5.2% in 2020 — the largest contraction in decades. Back in June, the World Bank outlined a roadmap for countries to navigate the economic problems, stating:

“Policies to rebuild both in the short and long-term entail strengthening health services and putting in place targeted stimulus measures to help reignite growth, including support for the private sector and getting money directly to people. During the mitigation period, countries should focus on sustaining economic activity with support for households, firms and essential services.”

Recognizing the declining value of cash holdings, some companies are already pivoting to Bitcoin as a treasury reserve asset. Nasdaq-listed MicroStrategy made headlines back in August when it announced the acquisition of 21,454 BTC — valued at $250 million at the time. More interest from big traditional institutions followed soon as they sought to buy into Bitcoin as a means of reserve.

Related: The next big treasure: Corporations buy up Bitcoin as a treasury reserve

The business intelligence firm doubled down on its Bitcoin adoption policy with an additional 16,796-BTC ($175 million) purchase in September. In less than two months, the company has seen the value of its BTC holdings grow by over $160 million. Similar things could be said of other non-crypto native companies that bought up BTC as a reserve.

While Bitcoin retains certain characteristics pertaining to currencies, the lack of supply caps for fiat makes any attempts to draw comparisons between both somewhat problematic. If so, perhaps market capitalization makes for a better parameter in gauging Bitcoin’s growth vis-à-vis the size of other major asset bases, as DiPasquale stated:

“Bitcoin surpassing fiat currencies is not a metric we should focus on since fiat currencies have no circulation limits as such. Instead, market cap is a better metric, and Bitcoin is now among the top-20 assets (stocks, ETFs and cryptocurrencies ranking).”

In a speech delivered on Nov. 6, Jerome Powell, chairman of the U.S. Federal Reserve, downplayed expectation of a swift recovery from the current economic contraction: “The current economic downturn is the most severe in our lifetime. It will take a while to get back to the levels of economic activity and employment that prevailed at the beginning of this year.”

Powell’s remarks echo similar warnings from the World Bank and other financial establishments. Indeed, the overwhelming consensus is that the confluence of global, regional and national economic constraints exacerbated by COVID-19 will be difficult to overturn in the short to medium term.

Pharmaceutical giant Pfizer recently announced that its COVID-19 vaccine was over 90% effective in preventing the virus. While the development constitutes a bit of good news in the fight against the pandemic, market analysts say the economy is destined for a downward path regardless of a vaccine.

Todaro believes that “equity markets are pricing in the COVID-19 vaccine as a savior to industrials and in-person retail companies.” However, he did add that good news alone will not kickstart economic recovery as supply and demand dynamics will need to be reestablished. Furthermore, according to Todaro, various established firms are in dire financial situations, and without additional relief by governments, they are likely to go bankrupt: “This uncertainty is starting to come back some now, with equities markets seeing a pullback.”

With more pain ahead, Bitcoin appears primed to receive even greater institutional attention as big-money players look for alternative investment vehicles. Indeed, the flow of smart money into Bitcoin already has some stakeholders predicting that BTC will challenge gold as the de facto hedge asset of choice for institutional investors.