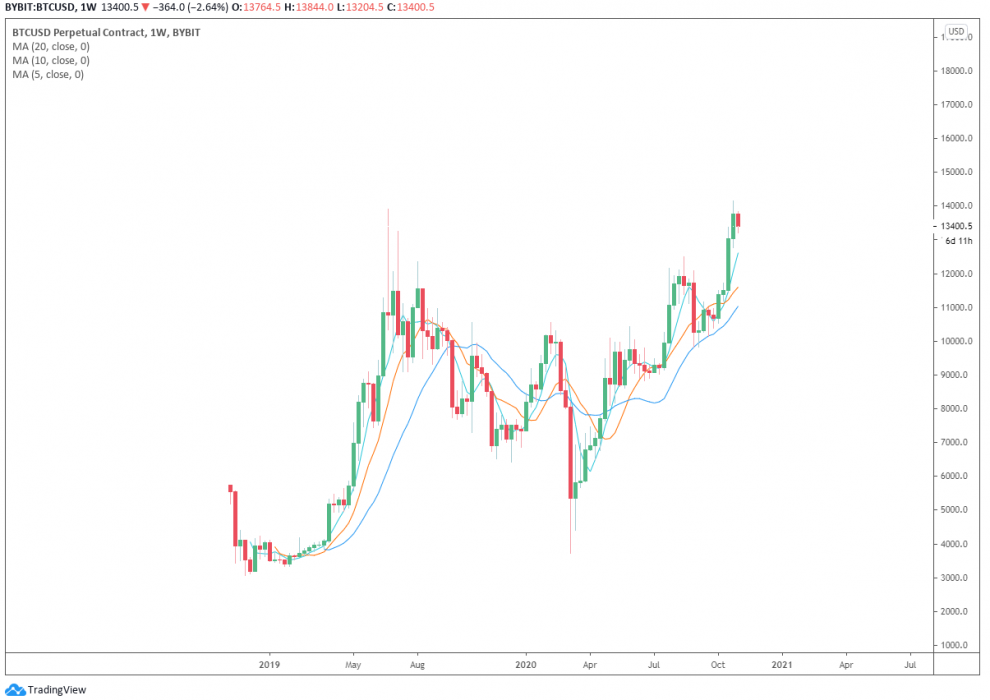 The price of Bitcoin (BTC) has pulled back substantially since its yearly high at $14,149 a few days ago. Yet, there are five signs that the real rally is only just starting.

As Cointelegraph previously reported, the monthly chart shows Bitcoin is far above key moving averages. Technically, that means the momentum is still intact, but a healthy pullback could be beneficial.

During the peak of a bull run, Google Trends activity for the keyword “Bitcoin” skyrockets as retail demand floods in. When market sentiment becomes euphoric, whales tend to take profit, causing the market to decline.

In the past several months, despite the strong rally of Bitcoin, Google Trends activity has been low. This indicates that not a lot of retail investors are searching about the dominant cryptocurrency on Google.

Additionally, according to data from The Tie, the monthly tweet volume of Bitcoin in October only rose 7.8%. The lack of retail interest despite the price being at multiyear highs indicates BTC might be in an early bull market phase.

According to the Mayer Multiple, historical Bitcoin price cycles show the current BTC rally is not overheated.

The Mayer Multiple analyzes the price of Bitcoin based on its 200-day moving average, which evaluates its long-term price trend. If the multiple is above 2.4, it indicates that the rally is likely overheated. In 2017, when BTC hit $20,000, as an example, the multiple rose to around 3.8.

Currently, as of Nov. 2, the Mayer Multiple is hovering at around 1.27. This shows the rally is not overheated or overcrowded, despite BTC’s uptrend from $3,600 to $13,350 since March.

During autumn, the northern areas of China undergo the rainy season. Major mining hubs that rely on hydropower can gain access to cheaper electricity, which allows them to mine Bitcoin more efficiently.

When the rainy season came to an end, there was a mass exodus of miners in the Northern area of China. Consequently, the hash rate of Bitcoin fell steeply in a short period.

Yet the 30-day average hash rate over the past year shows that the Bitcoin hash rate is still near its record high. Currently, it is hovering at roughly 132 million terahashes per second. In January, the hash rate was well below 100 million TH/s, by comparison.

Based on HODL waves, which evaluate the trend of long-time Bitcoin holders, more investors are increasingly holding BTC for longer periods.

HODLing activity has increased since March when the price of BTC briefly dropped below $3,600. Since then, investors have been steadily accumulating BTC.

The increasing holding of BTC put together with strong fundamentals, a favorable high time frame technical structure and positive technical indicators have strengthened the overall market sentiment that may eventually trigger an even bigger rally for Bitcoin.