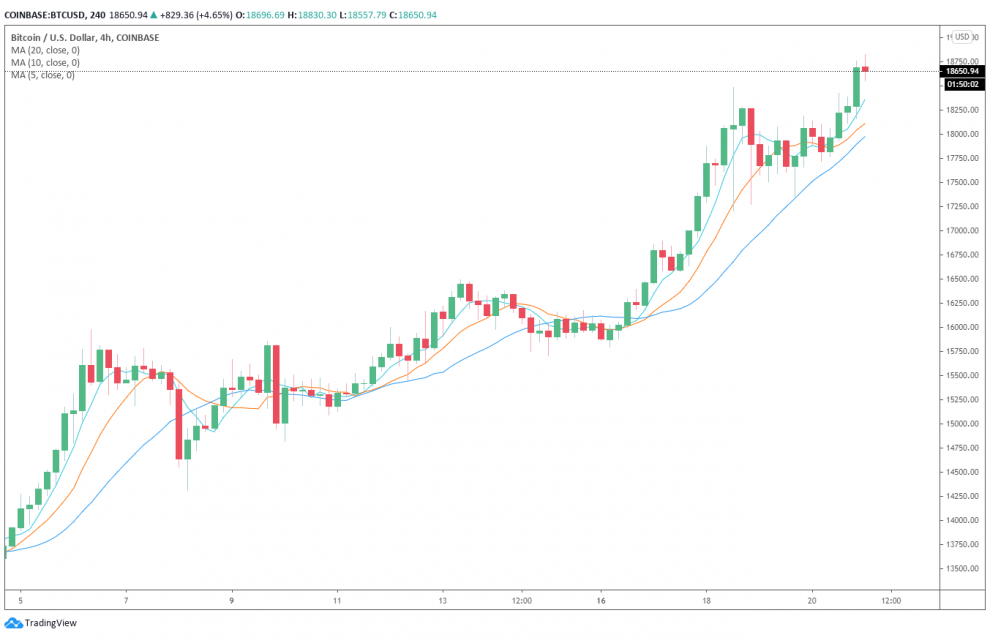 Earlier today the price of Bitcoin (BTC) hit $18,815 on Binance for the first time in nearly three years. Following the breakout, BTC is on track to see a new all-time high in the near term for four significant reasons.

The factors that make a new record high likely are growing institutional demand, reduced selling pressure, a spot-driven market rally, and the significance of the $18,500 resistance breach.

For Bitcoin holders to sell, they need to first deposit BTC to exchanges. When BTC exchange reserves drop, it often indicates that there is low sell-side pressure in the market.

According to data from Glassnode, the year-to-date Bitcoin balance on exchanges dropped 18%. Analysts at the on-chain market analysis firm said that BTC liquidity is continuing its downward trajectory.

This trend is significant because it shows there is hardly any appetite to sell Bitcoin at the current price level despite its rally from $3,600 to $18,700 within eight months.

During the CNBC interview, Reider said that Bitcoin is here to say and that it has the potential to evolve. He suggested that millennials favor BTC and that the strengthening reality of digital currencies becoming mainstream payment options were both major positive factors for BTC.

Considering institutional trends, Novogratz said 2021 would likely be as good or better than 2020 for Bitcoin. He said:

“Bitcoin is now an institutional asset. Period. The good thing is most institutions aren’t in yet. It’s why 2021 will be as good or better than 2020.”

The market is spot-driven amidst a sell-side crisis

On Oct. 10, a cryptocurrency derivatives trader known as “Light” said Bitcoin is showing signs of a sell-side liquidity crisis. He noted at the time:

“Bitcoin is experiencing the beginnings of a sell-side liquidity crisis. It has always been like oil on crack. Production is entirely inelastic, demand meanwhile, is reflexive.”

The performance of Bitcoin throughout the past two quarters depicted a clear lack of sellers in the market. Particularly after the halving, which occurred in May, the declining selling pressure on BTC is a notable positive.

In addition to the decline in sellers, crypto derivatives trader, “Cantering Clark” noted that the spot market is leading the rest of the market. He said:

The spot market leading the derivatives market is important because the latter enables traders to use high leverage. When the futures market leads a bull rally, the uptrend becomes susceptible to large price movements.

Maintaining $18,000 as support is critical

The sharp rejection on the day showed that large amounts of sell orders were filed above $18,500. Today’s second breakout above $18,500 confirms that there is enough momentum in the market to break through crucial multi-year resistance levels and flip them to support.

Based on the combination of these four factors, and the fact that global central bank policies of continued liquidity injections may raise inflation, the probability of BTC securing a new all-time high soon remains high.