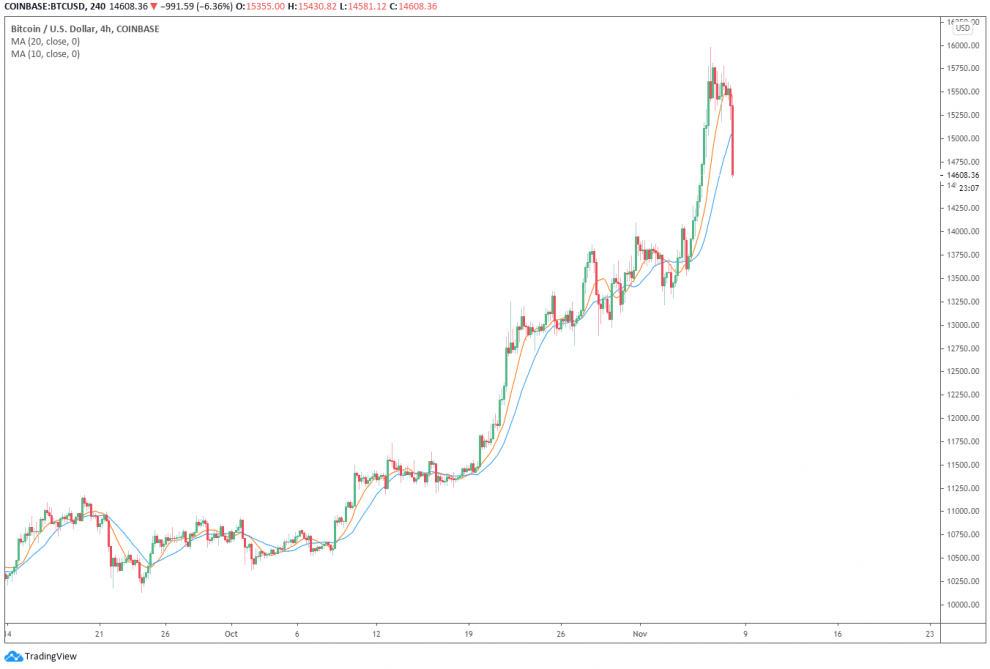 On Nov. 7 several major media outlets announced that after 4 days of rigorous vote-counting in key battleground states Joe Biden had managed to secure enough electoral votes to become the 46th President of the United States.

As the excitement over an incredibly close election starts to abate, analysts will take a closer look at how a Biden presidency may impact traditional markets and Bitcoin price. Three key factors to consider are the eventual passage of a new round of economic stimulus, a strengthening U.S. dollar, and the possibility of a stock market recovery.

Prior to the election, U.S. President Donald Trump said he intended to delay stimulus discussions until after the election. Consequently, the Democrats and Republicans struggled to come to a consensus on a deal.

The election of Biden brightens the prospect of a stimulus package by the year’s end. Democrats in the U.S. Congress already proposed a $2.2 trillion stimulus bill in October, but it failed to gain support in the Senate.

The second round of stimulus could positively affect Bitcoin because it significantly relaxes the financial conditions in the U.S. It would also uplift the U.S. economy, and in turn, stimulate investor appetite for high-risk assets.

The perception of Bitcoin has evolved from a risk-on asset to a safe-haven asset and an inflation play in recent months. Despite this, there are still multiple instances where Bitcoin price moves in tandem with the stock market so in the absence of appetite for risk-on assets, Bitcoin price can still rise.

If the Biden administration approves a stimulus package, then the U.S. dollar will rise. The eurozone, as an example, saw the euro rapidly surge after passing a major stimulus proposal.

The U.S. dollar has been underperforming against reserve currencies since March. Consequently, it aided the recovery of gold, Bitcoin, and other alternative stores of value, as they are priced against the dollar.

As such, there is a possibility that a second round of stimulus and improving investor confidence could initially have a positive impact on the price of Bitcoin. It is also important to note that over time, the strengthening dollar could apply additional selling pressure on Bitcoin and gold.

Stock markets may rally now that the election is ‘resolved’

Analysts also anticipate the U.S. stock market to recover following the confirmation of the election result.

Although many analysts believe Biden’s tax and environmental policies may eventually lead to a stock market slump, there is a high probability that stocks may rally in the short-term.

The stock market fell steeply throughout August and September as analysts warned against a contested election. The speculation around the result of the election is unlikely to have fueled a sell-off across risk-on assets.

Rather, the fear that the election would drag on without a clear winner caused the markets to rattle.

Following the conclusion of the 2020 race, there is less uncertainty in the markets and this could allow stocks to recover alongside other risk-on assets.

In terms of regulation, Compound Finance’s general counsel Jake Chervinsky said Biden has not expressed any public stance towards crypto. He wrote:

“President-elect Biden hasn’t said anything publicly about his views on crypto. For now, it really isn’t a big enough issue to warrant his attention. The next four years of US crypto policy depends on who he appoints to key positions; we’ll know more as the transition gets going.”

While the media has announced that Joe Biden is the winner of the 2020 election, President Trump has yet to concede and it is widely expected that Trump’s legal team will dispute the results and attempt to force a recount in each battleground state.

If this occurs, fear and volatility could quickly re-enter the markets and lead to a pullback in stock and crypto prices.

Bitcoin at $15K is now bigger than PayPal, Coca-Cola, Netflix, Disney
Most ‘organic’ Bitcoin pump in years — trader explains why a blow-off top is unlikely
Comment