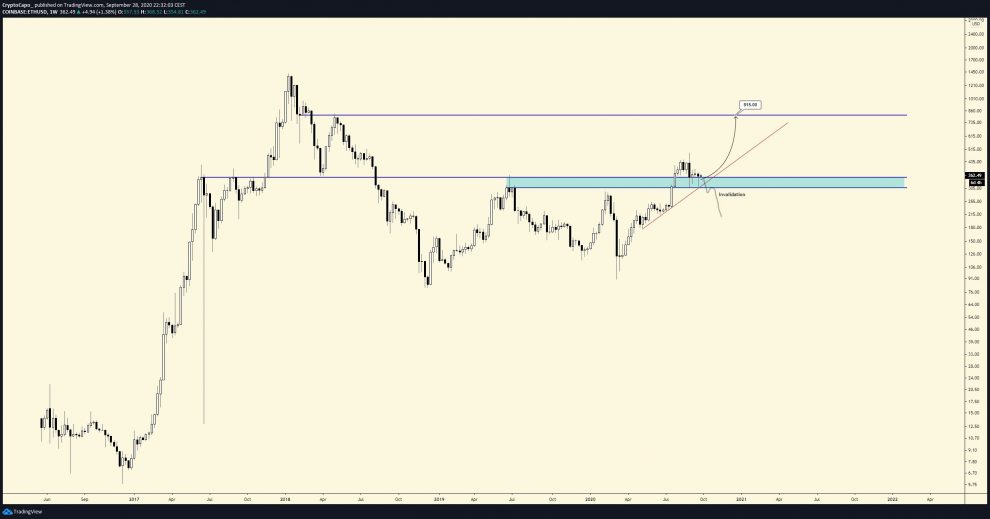 On Nov. 6, Ether (ETH) price rose to $447 on Binance as Bitcoin (BTC) price pulled back to the $15,500 level after losing steam around $15,900. Based on Ether’s strong momentum, traders anticipate a broader rally to emerge in the near term.

There are three potential reasons why Ether could see a large uptrend in the upcoming weeks. The catalysts are: an optimistic high time frame technical structure, favorable on-chain metrics and the launch of Ethereum 2.0.

ETH is bullish on the higher time frames

Referring to the $360 support level, the trader said:

“If this level holds, we should see $815 in the next few months. Invalidation on chart.”

Since making this prediction, Ether has in the past two months successfully defended the $360 macro support area. Currently, it is testing the $450 resistance level, which has remained a heavy resistance area all throughout 2020.

When a major resistance level breaks, a breakout rally can quickly occur, and this is why traders are speculating on the price of Ether a lot more than in previous weeks.

Data from Skew also shows that the 24-hour futures volume for Ether has substantially increased since late October. This shows traders are pinpointing $450 as an important level for ETH and are either defending or attempting to push through it.

According to the data from IntoTheBlock, 75% of Ethereum addresses are currently in profit. In comparison, 98% of Bitcoin addresses are in a state profit.

Investors are generally more likely to sell when they are sitting on large unrealized profits than when their investments significantly decline. As such, a substantially lower number of addresses being in profit for Ether compared to Bitcoin is a positive metric that supports the thesis that the rally has room for continuation.

ETH 2.0 is another bullish factor

ETH 2.0 is currently scheduled for launch on Dec. 1, and some analysts speculate that this could cause a supply shortage.

Under the ETH 2.0 staking system, users can stake 32 ETH and, in return, receive a 15% incentive on their holdings. The process of staking means allocating ETH to the ETH 2.0 contract addresses. During the period of staking, users cannot use or transfer their ETH unless they choose to stop staking.

If the popularity of staking grows, as it can generate stable yield with relatively low risk, it would cause the circulating supply of ETH to sharply decline, particularly on exchanges.

Fewer ETH would be sold and more would be accumulated as users move toward staking their holdings. This could create greater demand for the top altcoin and result in Ether price holding above the $450 level.