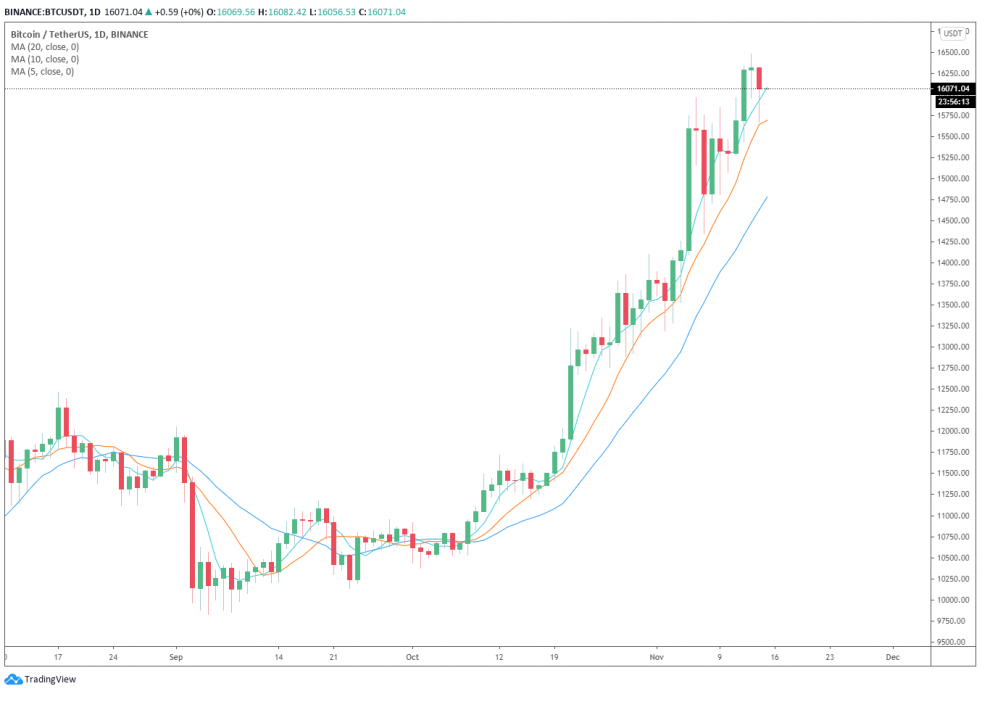 The price of Bitcoin (BTC) dropped to as low as $15,670 on Binance on Nov. 15. The highly volatile drop came hours after BTC reached $16,355, demonstrating strong momentum.

Three key factors likely caused the overnight drop in the price of Bitcoin. The three potential factors are a weekend shakeout, the daily moving average (MA) retest, and a retest of the parabola.

As Cointelegraph reported, algorithmic traders expected a weekend drop in the Bitcoin market to materialize.

There was a stack of sell orders above $16,500 which were not pulled when the price neared $16,400. This meant that the orders were genuine sell orders, applying selling pressure on the cryptocurrency market.

Atop the market structure that likely encouraged traders and bots to short, on-chain analyst Willy Woo said the weekend volatility is bullish.

He said that shaking off “bearish technicals” is expected, but the market still remains in the “buy the dip” territory. He wrote:

On the daily chart, the drop to $15.6k confirmed a retest of the 10-day moving average. The retest was important because in the past week, following a massive price spike, BTC retested the same MA before continuation.

If the price of Bitcoin continued to drop below the 10-day MA, it would have signified a further breakdown. But, the immediate recovery from the same level it recovered from on the Nov. 7 dip is relatively positive in the short term.

On Nov. 7, BTC saw a similar drop, albeit in a different price range. The price abruptly plunged from $15,753 to as low as $14,344, recording a 5% drop. The dominant cryptocurrency also recovered from the 10-day MA on the daily chart at the time.

In the next few days that followed, BTC went on to hit a two-year high at $16,480, confirming a strong breakout.

Josh Olszewicz, a chartist and a cryptocurrency technical analyst, shared a chart that shows Bitcoin is in a parabola.

During a parabolic uptrend, an asset’s momentum continues to build up as the price increases. But, if the parabolic cycle breaks, then an asset can be at risk of a large pullback.

Traders and technical analysts have pinpointed similar levels in the last 24 hours. Michael van de Poppe, a full-time trader at the Amsterdam Stock Exchange, similarly said that the $15,500 support level remains key for BTC in the near term.

In the short term, Bitcoin would need to see continuous resilience above $15,500 and ideally defend the $15,700 support as it did throughout the last 24 hours.