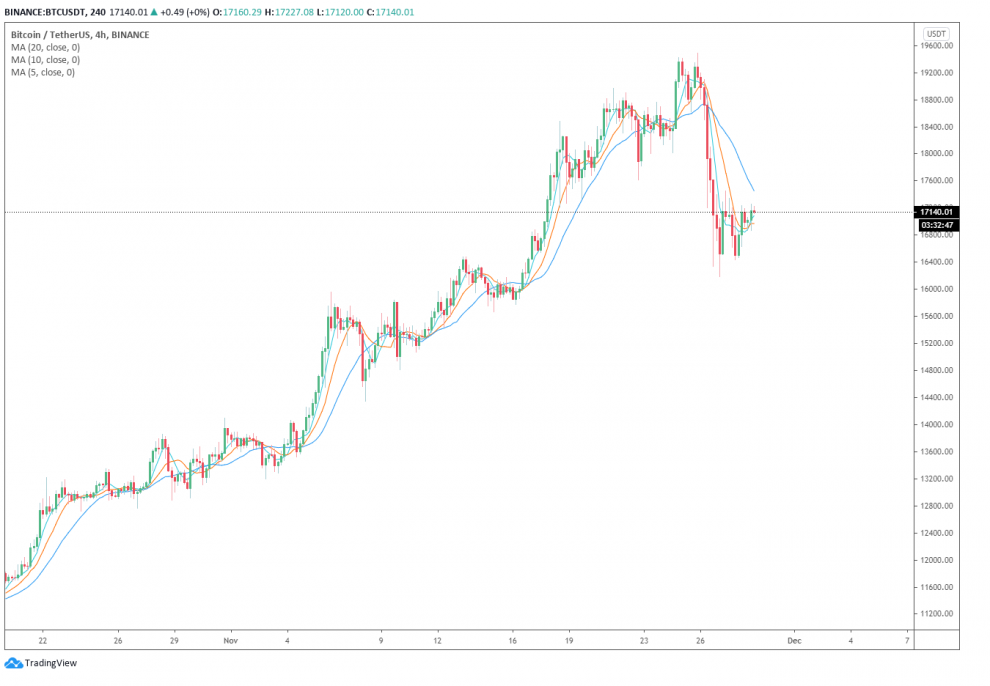 The price of Bitcoin (BTC) has been consolidating above $17,000 on Nov. 28 following a major correction from $19,400. In the near term, traders anticipate the dominant cryptocurrency to see another steep pullback.

There are three main reasons why traders expect a deeper drop to occur in the near future, namely,  historical cycles, the Fibonacci Sequence, and the record-high open interest of the futures market.

BTC price frequently saw 20% to 30% drops in past bull markets like the rally to nearly $20,000 in 2017. Although the rally continued afterward, major corrections occurred as the derivatives market became overcrowded.

Several traders now say that the price of Bitcoin should correct to the $13,800-$14,500 range if a similar pattern occurs.

In addition, some technical analysts are considering a worst-case scenario where BTC falls to the top of the August 2020 rally. That would put the price of Bitcoin at around $12,468.

Crypto Twitter is going to hate me for this…

A pseudonymous trader known as “Salsa Tekila” said that the technical outlook of Bitcoin is relatively straightforward.

As Cointelegraph previously reported, traders are pinpointing the 0.618 level using the Fibonacci sequence as a potential area of interest for buyers.

The Fibonacci sequence encompassing Bitcoin’s entire rally until $19,400 puts the 0.618 level at around $13,500. Under the sequence, 0.618 is considered a pivotal level for a potential trend reversal.

When the open interest of the Bitcoin futures market remains above $1 billion, the price of BTC tends to drop.

Earlier today, Cointelegraph reported that throughout BTC’s history, its price often corrected when the futures market saw a heightened level of trading activity.

Other traders, however, believe that Bitcoin could either rally to $18,000 before any pullback or even see a continuation of the general uptrend to new highs.

Michael van de Poppe, a full-time trader at the Amsterdam Stock Exchange, said earlier today that the range low for BTC price is currently holding, which is above $16,000.

This may result in a relief rally to $18,000. Whale clusters also show that the $16,000 area remains a strong support level.

Send it to 18k. pic.twitter.com/vsRtaFfDew

Similarly, a pseudonymous trader known as “Crypto Capo” said that based on previous fractals, BTC could first see $18,000 before another major drop.